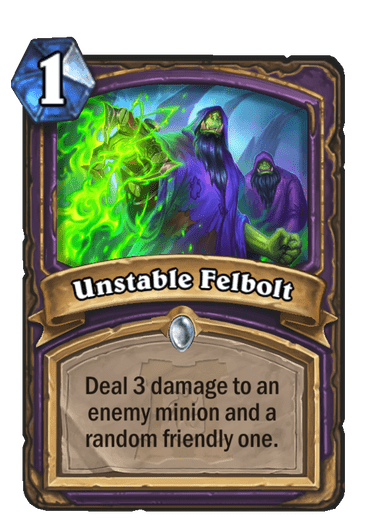 This is a pretty weak card by every measure (compare it to the new Holy Smite). However, we still think it’s likely to be played by control decks that generally don’t develop the board in the early game, making its drawback meaningless. Warlock sorely lacks early game single target removal, so it could accept this. 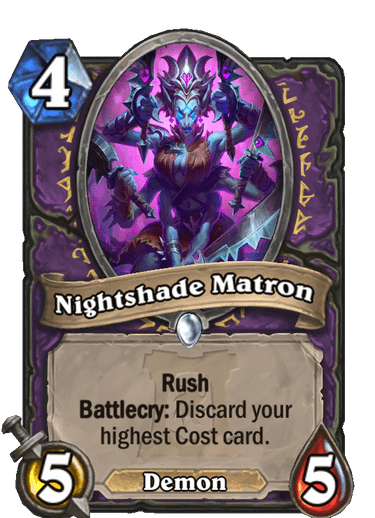 This card wouldn’t look very playable if it wasn’t printed alongside Hand of Gul’dan, the next card we’ll discuss. This turns Matron’s drawback into an advantage, so having a 4 mana 5/5 rush is just strong. It’s also a demon, which is relevant for Kanrethad Ebonlocke. If Zoo Warlock exists as a deck in this expansion, it will play Matron without question. 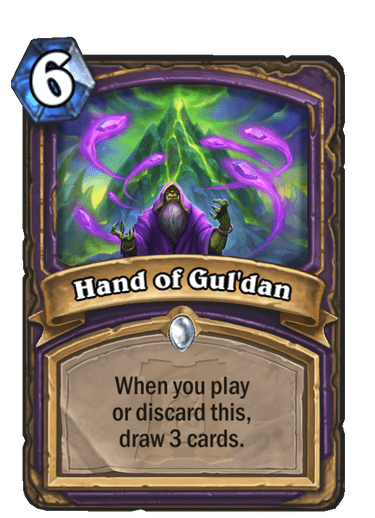 Zoo is likely never running out of steam with this card in its arsenal, since it’s easily enabled by both Nightshade Matron and Expired Merchant. Card draw also carries added value in increasing the chances you will draw your Kanrethad Prime. It’s unfortunate that this package has anti-synergy with finishers like Chef Nomi and Dragonqueen Alexstrasza, because we think they’d be considerations for Zoo if their high cost didn’t clash with Matron and Merchant. Zoo is just going to burn through its deck very quickly whenever Merchant discards Hand of Gul’dan. The problem? If you don’t draw your discards, this card is just dead in your hand. 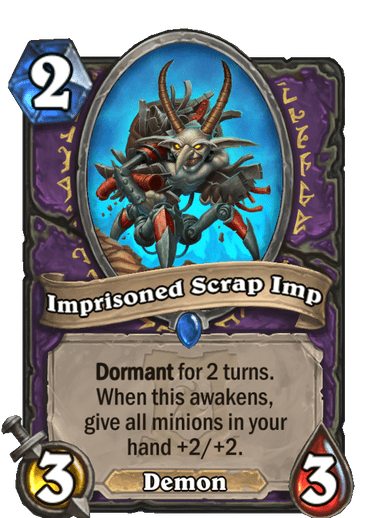 This card is upsetting. Not only is it painfully reliant on being drawn on turn 2 and is terrible to draw in the mid-game, the effect is a handbuff, which means it doesn’t even impact the board immediately. So, we’re layering one slow mechanic (dormant) upon another (handbuffing), in an aggressive deck that needs to take control of the board early and doesn’t even have a Saronite Chain Gang or a Doubling Imp to abuse it with. Thanks, we hate it. 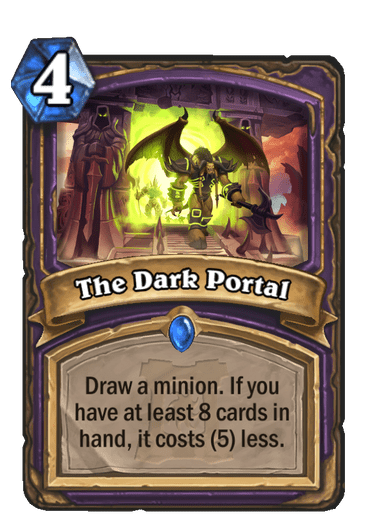 This card might be a sleeper. It reminds us of Prismatic Lens in being a tutor effect with a mana discount. We could see a Control Warlock shell that runs early game removal spells and tops the curve with big threats to cheat out with The Dark Portal. We can also see a spell Warlock deck that runs King Phaoris as its only minion. Some shenanigans could be at play here, so don’t write this off completely. 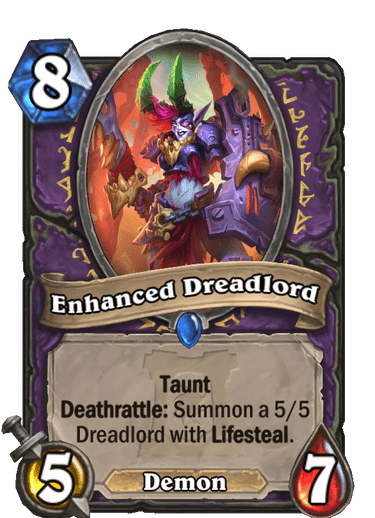 This is no Voidlord, but it is a very strong defensive minion that we could cheat out with The Dark Portal or the hero power rewarded by Supreme Archaeology. This card packs about 11 mana’s worth of value into an 8-mana card, so it has a pretty decent late game discount, though it’s not as good as the ridiculous Demon Hunter’s 8-drop, Coilfang Warlord. 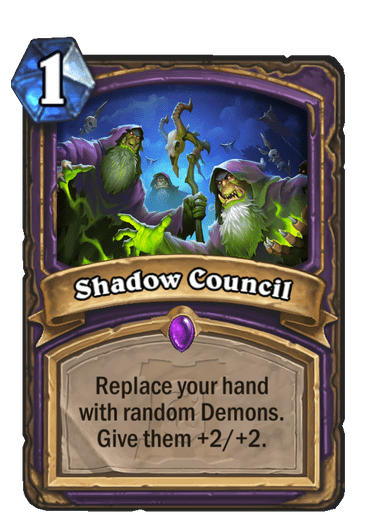 This is a classic meme card, similar in vein to Renounce Darkness. The only way it sees play is if the Dark Portal/Phaoris Warlock deck becomes a thing and this is used to turn all your reactive spells in hand into threats in the late game. Wait a minute… this doesn’t sound terrible on paper. Bronze players, you can take it from here… 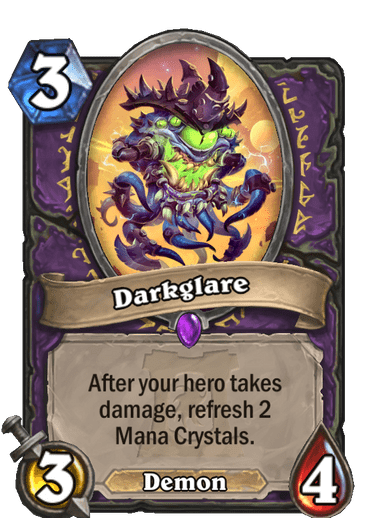 Pretty cool 3-drop that essentially makes your life tap cost no mana when it’s in play. Can also work with Flame Imp and other self-damage minions like Neferset Thrasher. It doesn’t really pay a stat penalty for its ability, as it’s a 3/4 with a demon tag. Worth trying to build around since potential mana cost discounts should never be underestimated, especially in aggressive decks. 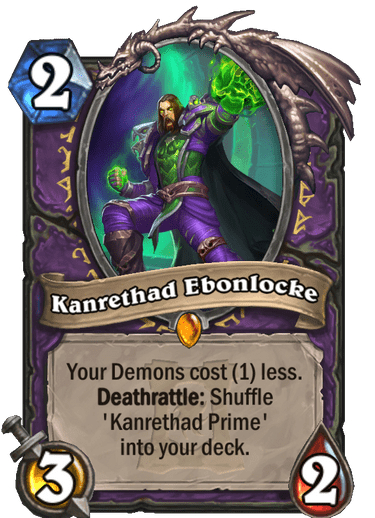 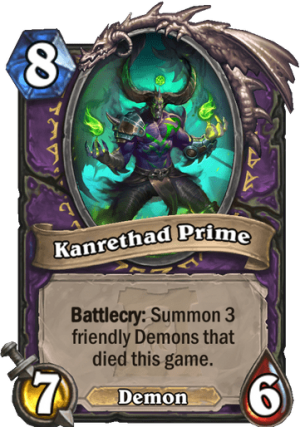 This is a very strong legendary. A demon discount heavily encourages Zoo Warlock to incorporate as many playable Demons as possible, while Kanrethad Prime makes a big board of those resurrected Demons in a mini-Bloodreaver Gul’dan fashion. It’s similar to the Paladin prime, though its initial body is even stronger. We can even see it being played in slower Warlock decks that attempt to leverage Emhanced Dreadlord and Aranasi Broodmother. When a card looks so strong that you can see wildly different playstyles abusing it, there is only one way to score it. 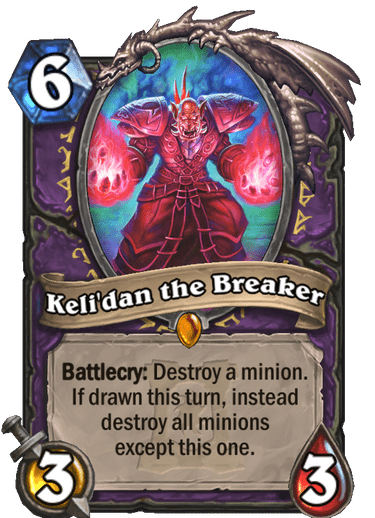 First, let’s look at the battlecry without the added condition. Is a “6 mana 3/3: destroy a minion” any good? Vilespine Slayer was one of the best cards in the game as a 5 mana 3/4 with a combo requirement, so this isn’t drastically inferior to it: one less health and half a turn slower. The condition turns this into a 6 mana Twisting Nether on top of a 3/3, which is clearly insane but not going to happen often… unless we run Plot Twist. For Plot Twist decks, the ability to fish for this minion on turn 8 and wipe the board looks quite good. The bottom line is we have a slightly weaker Vilespine Slayer that can occasionally win the game with a ridiculous ability off the top. Can’t hate it.

Year of the Dragon Rank: 6th

Warlock’s position in the meta has been mediocre or worse for most of this expansion following the nerf to Fiendish Rites, though we’ve noticed a recovery in Control Warlock after the departure of Leeroy. Rotation puts Warlock at a middling position. On one hand, it’s got a Descent of Dragons set that it can certainly build on. Its Savior of Uldum set isn’t bad either, though Rise of Shadows was certainly forgettable.

Much like the Year of the Dragon, the Ashes of Outland set brings a few promising cards for Warlock and some likely duds. This isn’t too encouraging, since other classes seem to have leapfrogged Warlock with superior sets full of game changers. However, if we’re looking at the various possible strategies available to Warlock, there is certainly quite a bit to work with. We don’t see a class that’s out of avenues to succeed in.

For starters, Galakrond Control Warlock stays pretty much intact through the rotation. The problem is that it hasn’t really received any upgrades. None of the new cards seem like a good fit for the archetype, so even though it looks quite good, there is a fear it will be left behind once Ashes of Outland launches.

Second, we’ve got Zoo Warlock, which is greatly encouraged to dump its Galakrond package for a self-damage build. It can also make use of some of the self-damage cards it has received in Saviors of Uldum. Hand of Gul’dan will provide it with enough card draw to last for a very long time, while Kanrethad Ebonlocke provides it with both an early power play and a late game swing turn that’s easier to set up than the slower Galakrond. We think it’s going to be a star performer in the deck.

Other strategies are also lurking. Quest Warlock has received a couple of specifically strong tools in Keli’dan and Enhanced Dreadlord, but the deck is so far away from being competitive right now that we’re unsure whether this is enough to close the gap from the rest of the field. Handlock is probably dead without Mountain Giant, but we’re curious about a different Big deck that abuses The Dark Portal.