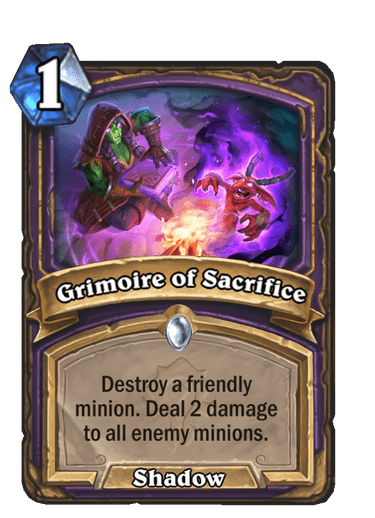 1 mana for an asymmetrical 2-damage AOE is very strong, but the requirement is quite limiting for deck building purposes. Would Control Warlock decks consider running Nerubian Egg? Perhaps Explosive Sheep? Does this card attract enough synergies around it to help mold a functioning shell? We’re not too sure about that, but Grimoire of Sacrifice has potential. 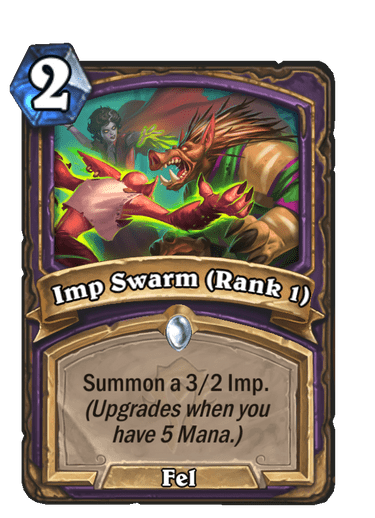 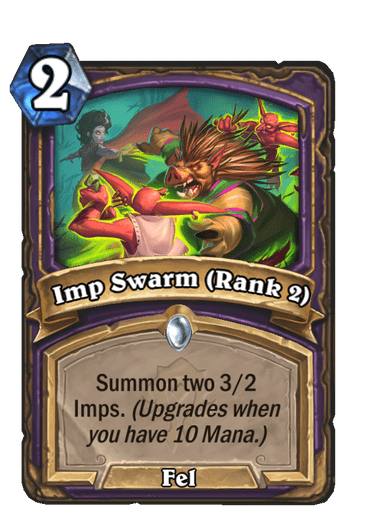 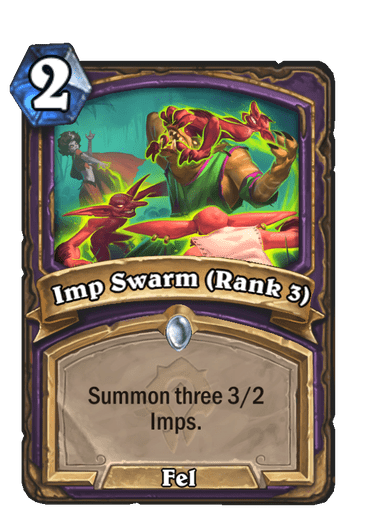 This card is quite simply awful. Zoo Warlock cannot accept playing a 3/2 on turn 2, and by the time it scales into a more acceptable drop, we’re well into the mid-game when many matches are already decided for aggressive decks. Warlock simply cannot afford to wait around for a card to be remotely playable on turn 5. 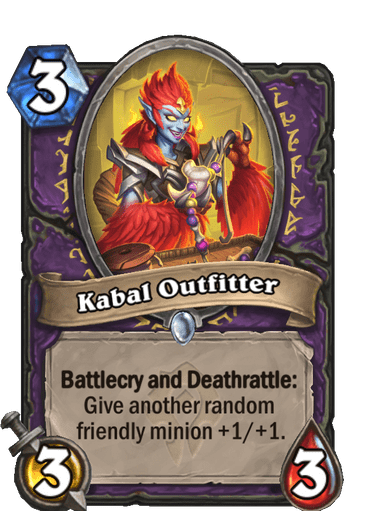 This is legitimately a 3 mana 5/5, which is well above the curve for a 3-drop and makes it a very strong consideration for Zoo Warlock. Outfitter can put on so much pressure when it connects, and it’s very awkward to trade into since Warlock usually has multiple bodies on the board. Just strong. 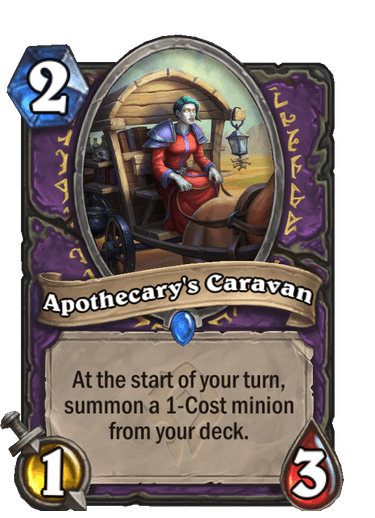 Another unplayable caravan that an aggressive deck would never consider. Warlock wants to take hold of the board from the beginning of the match and playing an undersized 2-drop that is useless when you fall behind is not a good strategy. This isn’t even strong if it manages to trigger once. Hard pass. 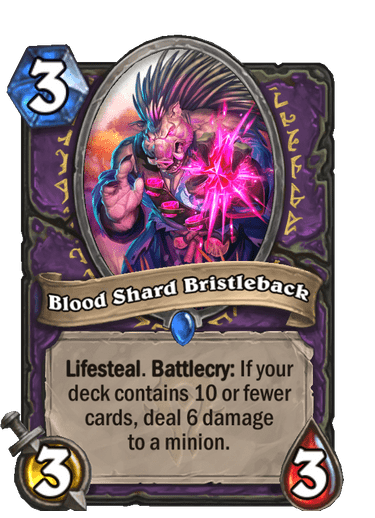 This card has a strong payoff but a crippling condition that makes the payoff irrelevant unless you’re dedicated to literally burning through your deck with reckless abandon. Why would you do that to yourself? We just don’t see a good reason. The fact this minion cannot hit face also makes us sad. As it would be playable if it could! 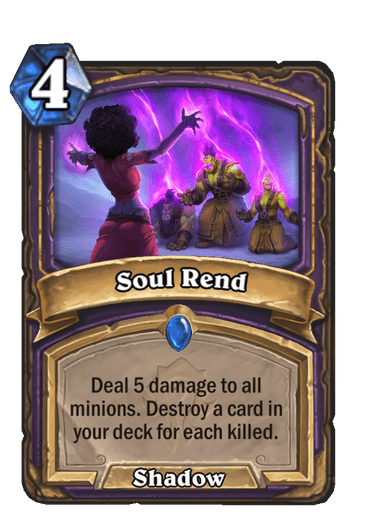 Much like Bristleback, this card is only playable if your Control Warlock deck is interested in burning all its cards. We’re going to stick our necks out and say that we don’t see how the self-milling Warlock archetype looks competitive in any way, shape, or form, so Soul Rend doesn’t have a good chance of making it into the meta. 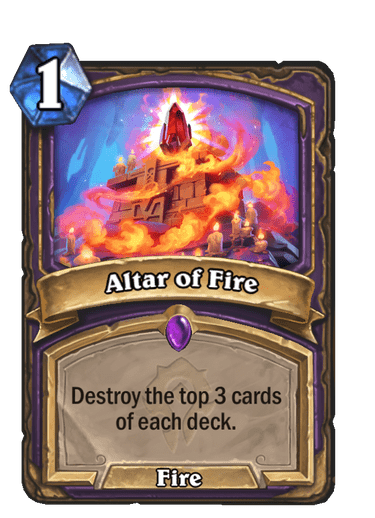 Are you interested in spending 1 mana and a card to do nothing? We’ve got just the card for you! Yes, this card supports the self-milling Warlock archetype. Yes, it could be a funny counter to Lorekeeper Polkelt or some degenerate combo deck in Wild, but we’ll be surprised if Altar of Fire becomes a permanent mainstay in a constructed deck in Standard. We can bet that some players will experiment with it, and some might claim it’s even good, but it’s one thing to play the card because you included it in your deck, and it’s another thing to play the card because you should include it in the deck. 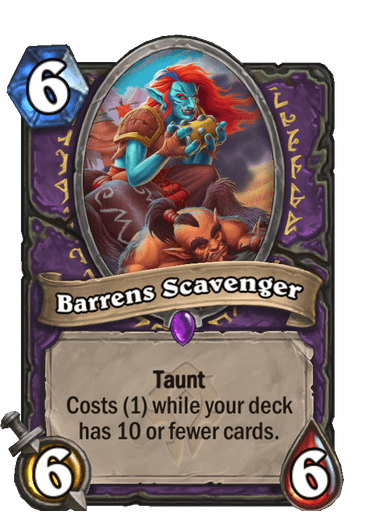 Can we compare this to Bladed Lady? On one corner, we have a 6/6 rush minion that can cost 1 mana as early as turn 4 simply because of a Demon Hunter playing cards they already want to play in their deck. On the other corner, we have a 6/6 taunt minion that can cost 1 mana at some point in the late game because of a Warlock burning their own deck. The Bladed Lady wins by knockout in the first round. 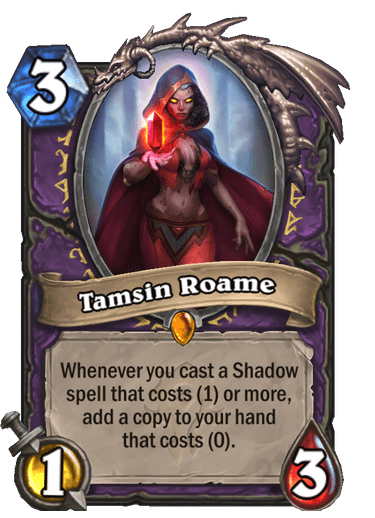 You can think of Tamsin as a Brann for Shadow spells, but she’s even more flexible since you can opt to keep the copy of the spell in your hand for later usage. Tamsin instantly turns any Shadow spell into a worthwhile consideration in Warlock decks since the doubling effect for no additional mana is extremely powerful. Even a card such as Siphon Soul becomes nutty when paired with her. But we don’t necessarily need expensive spells to make Tamsin tick: just a harmless little Drain Soul can go a long way. Excellent tool for Control Warlock and can make for some big blowout turns. 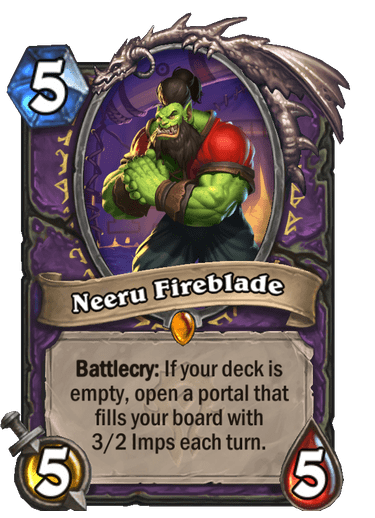 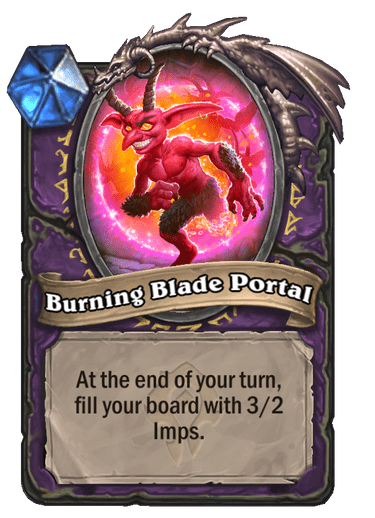 The payoff to self-milling Warlock decks we’ve all been waiting for! If you’ve managed to burn through your deck and reach the end of it, you get… a stronger version of the Nether Portal reward for Lakkari Sacrifice? A card with far less immediate impact on the board than Chef Nomi? Sure, this effect lasts for several more turns before you die to fatigue, but this is an incredibly underwhelming reward for building your deck in such a warped way. Should we also mention the fact that you can just… burn this card while milling your deck and there is no way to retrieve it? The fail rate here is astonishingly high.

After the community’s uproar about the dominant Tier 4 Tickatus Warlocks that have plagued ladder throughout Darkmoon Faire, Warlock is now encouraged to burn its own cards as well as the opponents’ to further its game plan. We use the word ‘encourage’ and ‘game plan’ very generously here.

The Warlock Barrens set is slightly stronger than a complete joke. A self-milling Warlock has all the early signs of a deck that’s going to boast a win rate that’s under 40% once the expansion comes out. It looks incredibly inconsistent. We’re talking about a deck that can just end up burning the payoff cards it’s trying to build around! We’re a bit shocked this set does not have any tool to circumvent this obvious issue.

So, is Warlock dead? Not really. Zoo Warlock still has most of its shell in place, and while its biggest addition from Barrens is Kabal Outfitter, Nerubian Egg will very likely make its return to the archetype.

Control Warlock also seems strangely promising to us, and what makes this archetype stronger in our eyes are two main factors.

The first is the rework of Jaraxxus, which is now a legitimate late game win condition that can be a strong alternative to Tickatus. Warlock has the tools to make Jaraxxus a better tempo play through Strongman and Tour Guide as well, which are sticking around. The availability of an “infinite” win condition allows Warlock to run more cards that help its survivability.

This brings us to the second point: survivability. Drain Soul will be a big help coming from the Core set, and we suspect that Artificers will make their return to the class alongside the addition of Tamsin Roame (there’s massive removal/life swing combo potential here). Kazakus is another option to provide a mid-game power spike to contest aggression. Even the buff to Siphon Soul could be very relevant because of Tamsin.

So, Gul’dan doesn’t need to burn his own cards. Imagine doing that when you can just burn the opponents’?