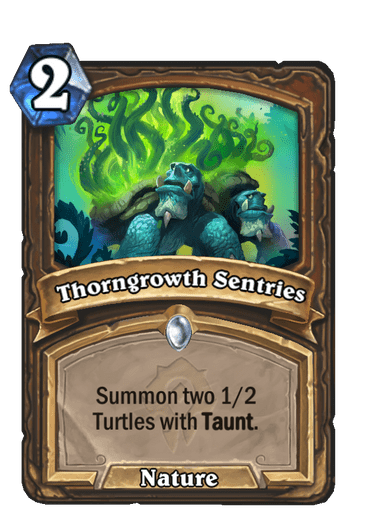 Similar card to Dreamway Guardians, but arguably better since taunts make it more difficult for your opponent to trade optimally and you can hide threats behind them. Very likely to see play in a Gibberling Druid deck, and perhaps even in a dedicated taunt deck. 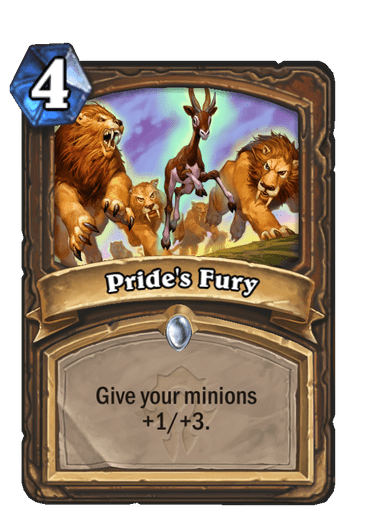 This is a thick buff that’s going to make your board extremely difficult to remove. If Pride’s Fury hits 3 minions, it’s worth 3/9 in stats, which very much pays for the cost. Any Token Druid deck is likely to play this as a payoff card next to Arbor Up in the absence of Savage Roar. 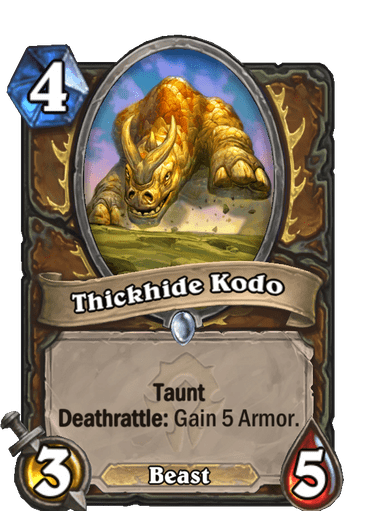 A Sen’jin Shieldmasta that gives 5 armor. There are plenty of examples of 4-mana taunts that were clearly stronger than their vanilla counterparts and still did not see much play, such as Groundskeeper. We don’t think Kodo is even good enough to see play in a Taunt Druid deck, let alone other Druid decks. Plainly mediocre. 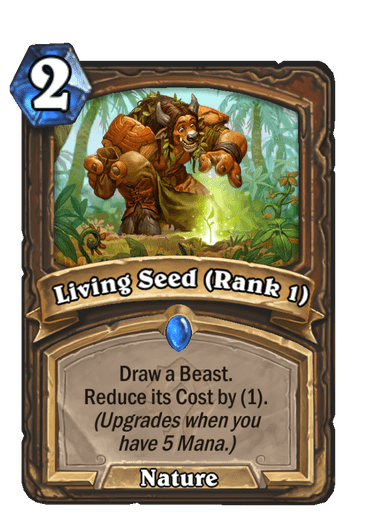 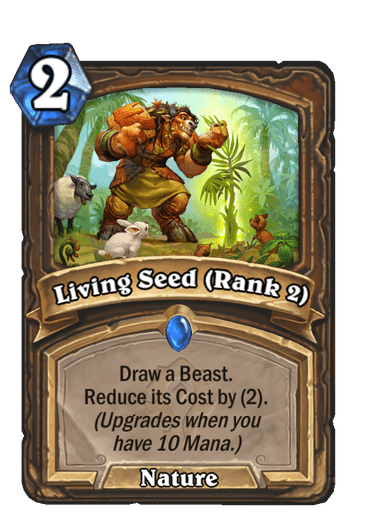 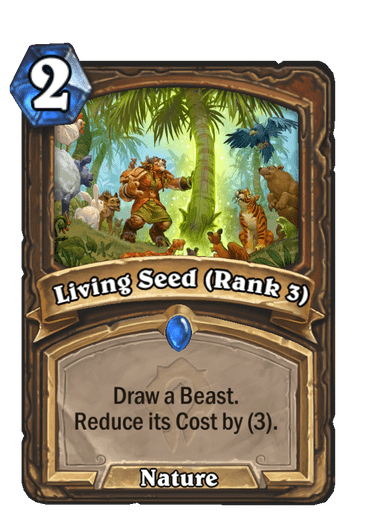 This card feels like a worse Insight, as it’s slower to activate and limited to beasts. We’re not sure what beast we’d want to draw with this, as we very much prefer summoning our beasts in Druid through Guardian Animals. Unless the beast in question is a core piece for this theoretical Druid deck, it’s unlikely to see play. 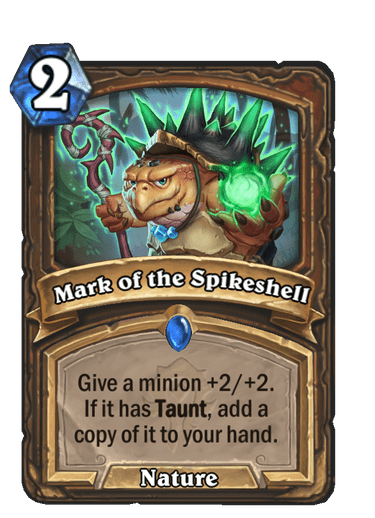 If this spell targets a minion that doesn’t have taunt, it’s clearly not good enough, as Druid has had a better buff in its classic set for years and it almost never saw play. So, Mark of the Spikeshell needs to consistently hit taunt minions to be a playable consideration. This means we need a dedicated Taunt Druid deck for it to work, and even then, we’re not particularly excited about the effect once it connects. However, we do think there is some merit to explore the possibility of its combo with Greybough, so we’ll give it a tentative score. 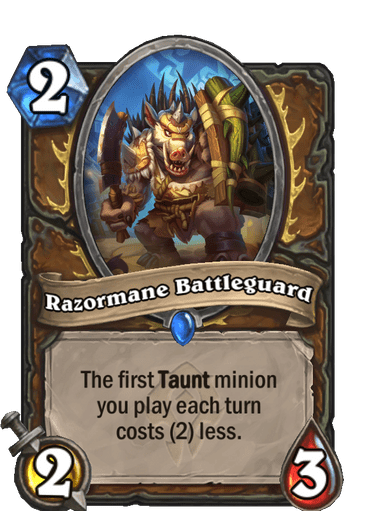 If a Taunt Druid deck ever works, it’s probably because of this card. Essentially, this is a Foxy Fraud for taunt minions, but one with a recurring ability that demands removal. In theory, Battleguard hides behind taunt minions and keeps discounting mana. Best case scenario, it’s paired with an Annoy-o-tron on turn 2, survives and cheats out a Greybough on 3. Of course, most constructed decks should be able to kill it the moment it’s played. We’re not sure we should be counting on a 3-health minion to ever stick for more than 1 turn, but this card’s floor is already quite strong. 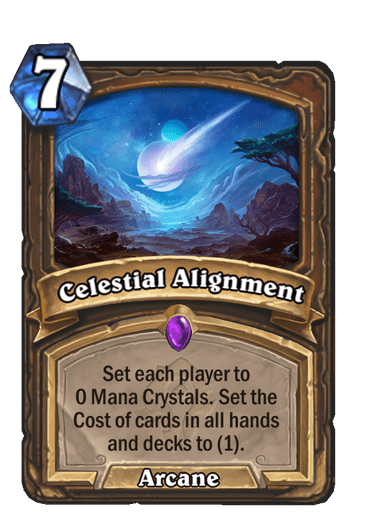 One of the strangest, and most difficult cards to evaluate in the set. Celestial Alignment reminds us of Astral Communion, which drove players to run an extremely greedy Big Druid deck. Alignment is clearly better and has more chances of being a competitive card since it doesn’t have a crippling drawback, but the deck-building restriction it imposes could still produce a deck that’s more of a fun meme than a competitive one. Nevertheless, Druid certainly has the ramp to hit it early in the game, as well as some big cards that could be very powerful if they cost 1 mana. The question is, can it handle the opponent’s 1 mana plays?

Druid of the Plains 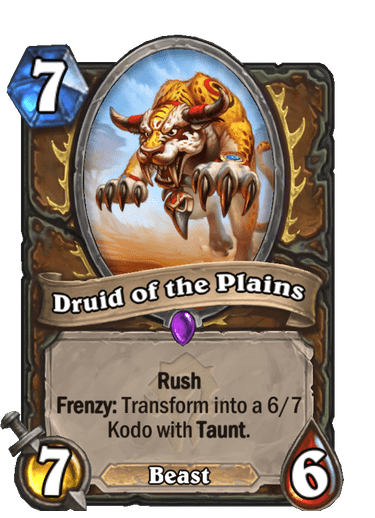 This card reminds us of Fireland’s Portal, or more recently, Coilfang Warlord. The good news for Druid of the Plains is that it’s a 7-mana card in a class that has Overgrowth, so it offers a very good immediate follow up to ramp, which provides both removal and protection. Most minions in the game don’t have more than 5 attack, so it should have no difficulty activating its Frenzy ability. 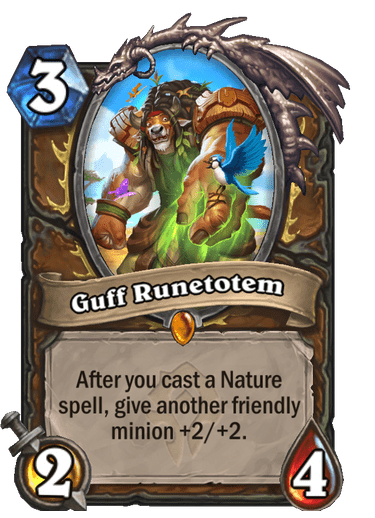 This card is simply unreal. You can think of it as a buffing Questing Adventurer. The initial stats are better, the buff is stronger, but limited to a spell school that happens to be widely used by the class. What makes this card so powerful is that it can translate into immediate damage, which makes it a dangerous finisher. If you have a single minion on the board, you can use Guff to chain multiple spells and direct a significant amount of damage to face. Druid can easily do that since Lightning Bloom, Innervate and Nature Studies are all nature spells. Alternatively, we can chain Guff alongside Gibberling and just create a ridiculous blowout turn in the early-to-mid game. There’s just no point in the game where Guff isn’t a potential game changer. 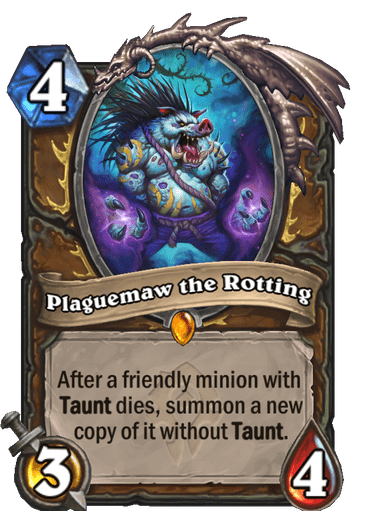 This card reminds us of High Inquisitor Whitemane. Though they work slightly differently, Plaguemaw’s best case scenario relies on us playing it while running our minions into things to get value off the effect. Its usage as a board protector, just hiding it behind taunts, is not something that looks particularly enticing. As a 4-mana must-kill threat, it’s always getting removed on the turn it’s played. So, it’s usually shining when we’re already winning the game. Even in a Taunt Druid deck, we’re not sure we’d play this card.

Druid received an intriguing set that can inspire the class to go in many different directions. At the center of it is Guff Runetotem, which is one of the very best cards in the set and looks like a particularly disgusting addition to Gibberling Druid, or any other fast-paced deck with even a modest nature spell package. Losing Savage Roar will hurt, but Pride’s Fury could provide an alternative way for token Druids to leverage their boards.

Taunt Druid seems to be getting support in this expansion, but unlike its Witchwood iteration, the Barrens versions seems to be of the swarming type thanks to Razormane Battleguard. There is quite a bit of early game blowout potential here, but we’re a bit concerned with this deck’s reload ability. Without Fungal Fortunes or Rising Winds, it may struggle to draw cards.

Ramping Druid decks could learn to appreciate Druid of the Plains as a follow up to Overgrowth, since the class has a bit of a hole in its 7-mana slot following the nudge to Guardian Animals as well as Overflow’s retirement to Wild. Primordial Protector could become a very impactful neutral addition for these decks as well. Celestial Alignment is a curious build-around that could either not see the light of day or become meta defining.

To conclude, Druid might become the most erratic class in Forged in the Barrens, with a wide spectrum of archetypes potentially available. Nature is unpredictable.