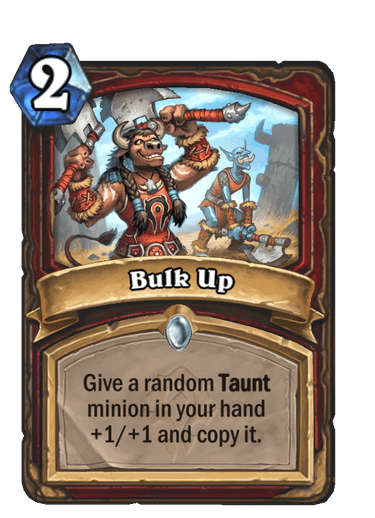 It wouldn’t be a Hearthstone expansion without a handbuff card for Taunt Warrior. We do like the fact that Bulk Up maintains your hand size, since one of the problems of Taunt Warrior buff cards of the past is that they made the deck lose the resource battle against other defensive decks with strong removal (since you could go 2 for 1). This still doesn’t make us want to play Taunt Warrior though. 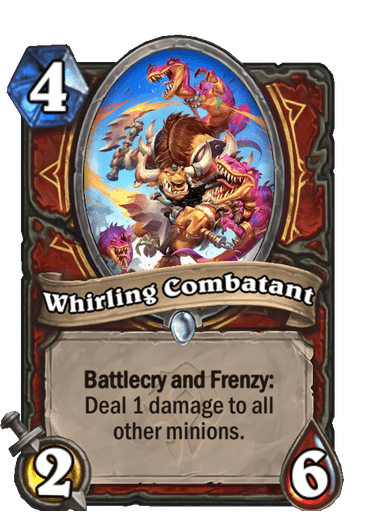 This a very synergistic card for a class that loves to Whirlwind. A 2/6 for 4 mana that can double WW can be quite viable for Warrior decks, especially of the “enraging” kind. This card can be paired with activators to clear wide boards instantly or to activate your own cards to their full potential. Very likely to find a home in a Warrior deck at some point. 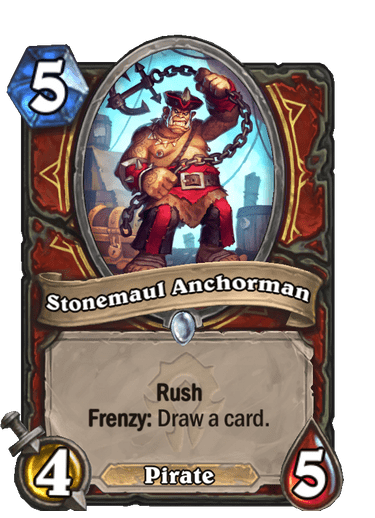 A strong body on a rush minion that also draws? So, we get to maintain card advantage while making a good trade. Compare this to Azure Drake or Big Ol’ Whelp and this is clearly very good. The only problem with Anchorman is that Warrior is so stacked with powerful draw effects and a robust mid-game that it might not make the cut. 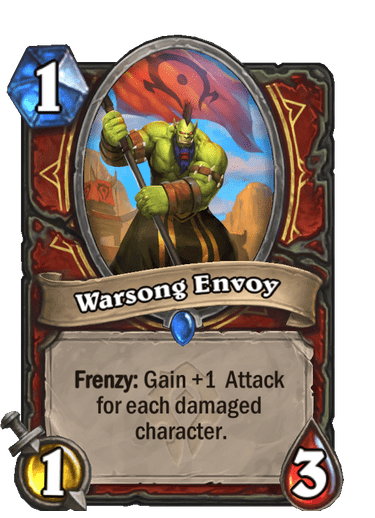 This 1-drop works on every damaged character, including enemies. On turn 1, this is going to be a solid 1/3 body with the potential to scale. 1/3’s with upside usually make for good 1-drops, so faster Warrior decks are likely to be interested unless they run Saurfang. 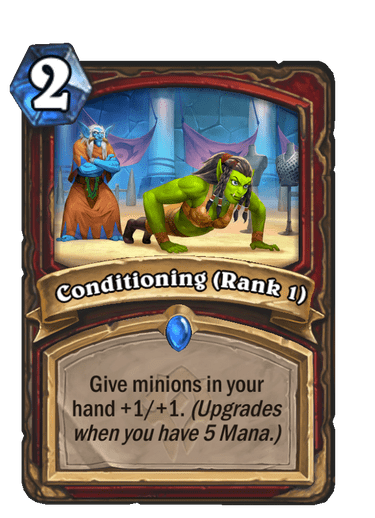 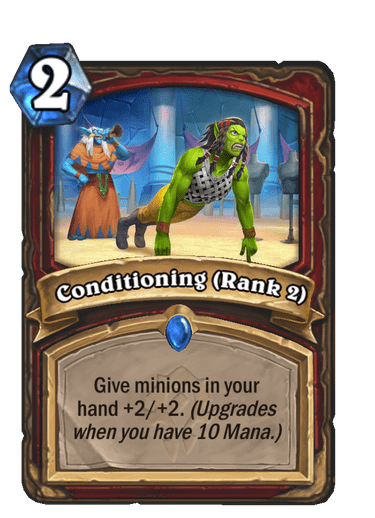 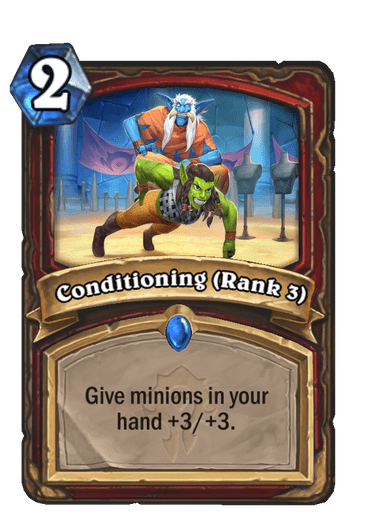 This is an utterly terrible handbuff card. In the early game, this is a Smuggler’s Run that costs double the mana, which is unacceptable. On turn 5, this is comparable to Glowstone Technician, which is a solid step forward but nowhere near for us to justify in a Warrior deck. Straight to the dust bin. 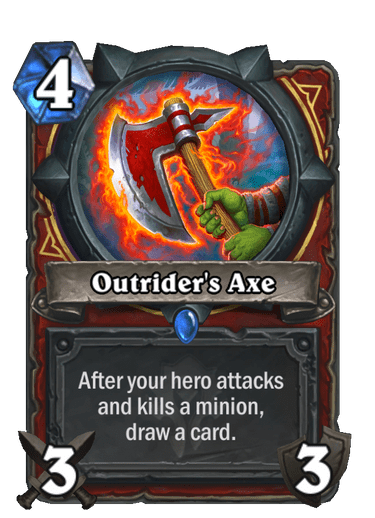 This weapon establishes Warrior as the class with the most stacked 4-mana plays in the game. Imagine thinking that Sword Eater was Warrior’s peak at that slot? Outrider’s Axe is an unreal draw engine that makes opponents wary of developing anything into it. It either creates a massive card advantage for the Warrior, or if the opponent chooses, stalls the game in the Warrior’s favor. Aggressive decks simply cannot play around this card and are left giving up full value while seeing their boards whittle down. Should we remind you that Corsair Cache and Cutting Class are also Warrior cards? Outrider’s Axe is one of the strongest cards in the set, without a doubt. 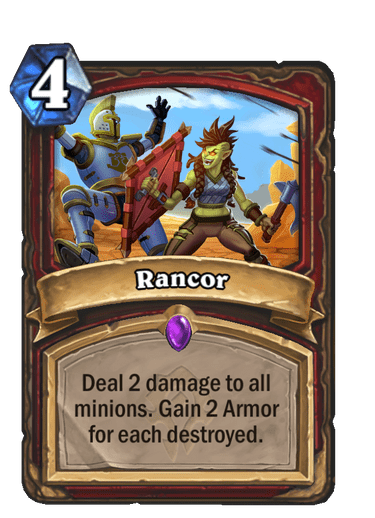 This card could be a huge stabilizing AOE effect for Control Warrior, creating a massive swing both on board and in life. Rancor also works on your own minions and makes for a particularly disgusting combo with Lord Barov. We can’t see Control Warrior passing on this valuable tool, and it should become a staple for the archetype going forward. 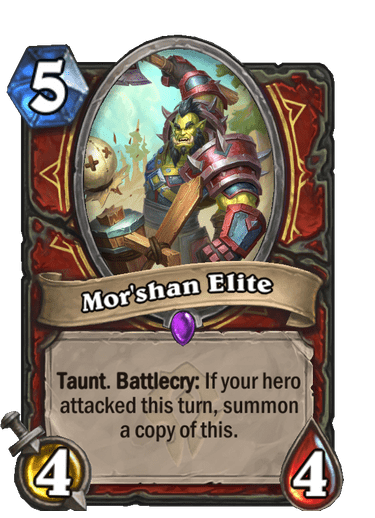 Remember the stacked 4-mana slot we just talked about? Warrior is always going to have a weapon equipped on turn 4 that is ready to activate Mor’shan Elite, so the condition is very easy to meet without going through any deckbuilding hoops. When activated, Mor’shan offers stronger stats for the cost than Saronite Chain Gang. 8/8 stats in taunts for 5 mana is nuts, and it’s better that they’re split into two bodies since it makes the card more resilient to removal. We’re not going to even talk about its handbuffing potential, since it doesn’t even matter. A staple for any Warrior deck running Sword Eater and Outrider’s Axe, and that means a lot of them. 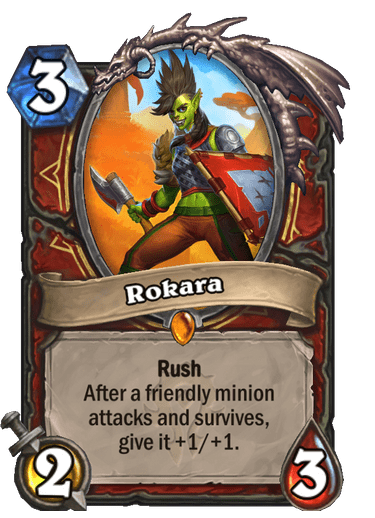 It’s easy to understand the power of Rokara when you split it into two parts. The first part is a 2/3 rush for 3 mana that buffs itself if it attacks and survives. That seems easy to achieve in the early game with a favorable trade, which makes Rokara a priority target for removal. The second part is her aura, in which she also buffs any friendly minion that attack and survives. That is a crazy ability on top of a card that’s already solid at its baseline. Add the synergy available with Stage Dive and Athletic Studies, and Rokara becomes a legendary that every Warrior deck through the entire meta spectrum will be interested in running. Powerhouse. 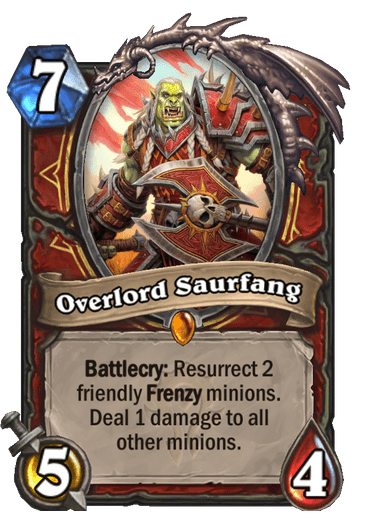 This is an intriguing build-around card with heavy swing potential. Saurfang builds a board while activating frenzy minions you’ve included in your deck, which can be quite devastating for your opponent. Think of what it can do with Whirlwind Combatant, for example. Plenty of ways to abuse it through deckbuilding and some of the neutral frenzy minions available, so we give it a good chance of seeing success.

Warrior seemed to be in a nightmare position. After all, how can it possibly recover after the loss of Risky Skipper and Bloodsworn Mercenary? Both were crucial for Warrior’s dominance in the early game and the late game, respectively. How could Warrior recover from losing Battle Rage and Acolyte of Pain year after year?

Guess the answer is to just give the class more BUSTED cards, and that’s exactly what is happening in Forged in the Barrens.

Card draw problem? No problem at all. Outrider’s Axe is so absurdly good that any Warrior will look to have 2 copies of this weapon in their decks. Mor’shan Elite’s condition is irrelevant because of how stacked Warrior’s 4 mana slot is, which means it will be a permanent 8/8 in taunts for 5. The class’ mid-game is simply unreal.

Then we have Rokara and Samuro, which are strong cards for their own reasons but even more so due to Stage Dive and Athletic Studies. Not interested in Samuro or Kargath because you want a faster deck? No problem! Take a couple of Stonemaul Anchormen and draw some more cards perhaps.

How about some AOE and armor gain? Rancor takes care of it in Control Warrior, while Whirlwind Combatant is the perfect foil to Armorsmith in Enraging Warriors.

Need a late game win condition? Warrior can draw so many cards that it might as well support C’Thun, but Saurfang is the kind of build around we can get behind in faster Warrior decks too.

And when we say faster, we mean that everyone should get in here!