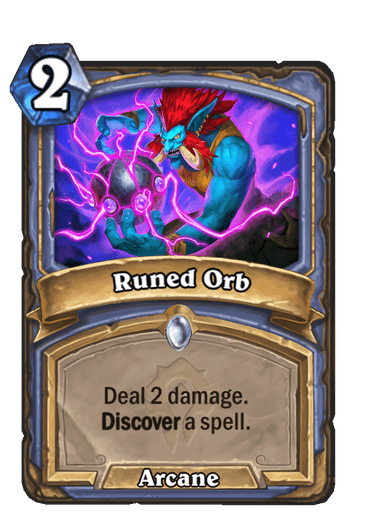 With the loss of Frostbolt, Mage gets a 2-mana damage spell with value attached to it. Runed Orb is basically an unconditional Arcane Breath, which should be strong enough to see play even though its mana cost is doubled. Many different Mage decks should opt to run it. 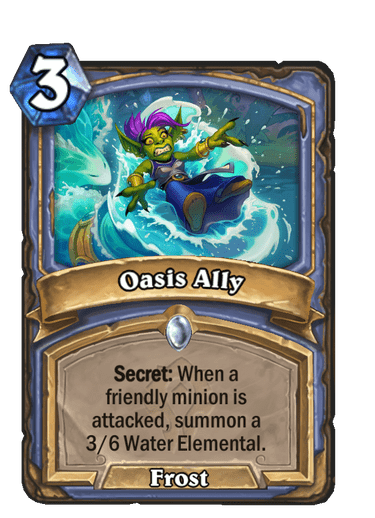 This is a pretty good secret when compared to Netherwind Portal. It’s more difficult to proc since it requires you to have minions on the board, but it always summons a quality 4-drop in Water Elemental. If Secret Mage exists, it’s highly likely that it will run this card. 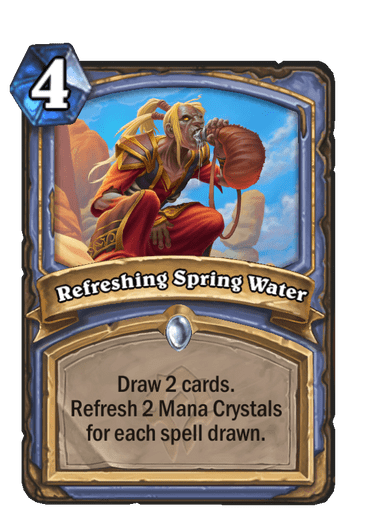 Very good card draw engine when compared with Arcane Intellect. If your Mage deck consists of ~50% spells, then it should refresh at least 2 mana ~75% of the time. That already makes it quite strong, and if your deck is even more dense with spells, Spring Water becomes more powerful. Mage likes to run spells, so it should like Spring Water. 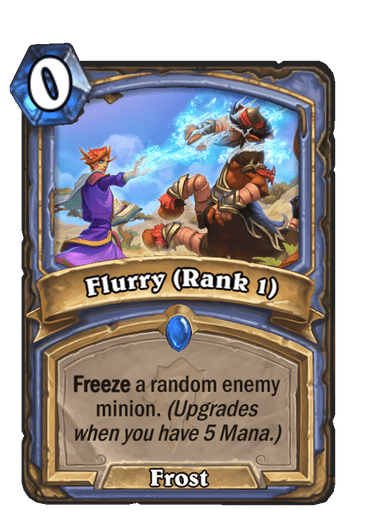 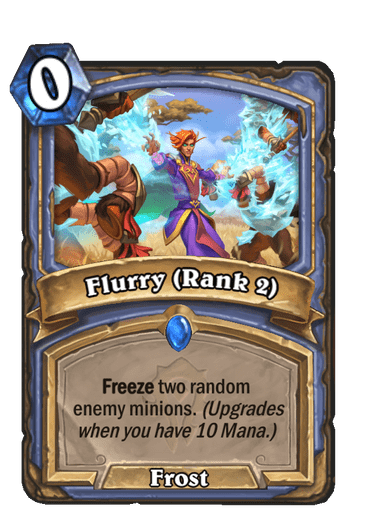 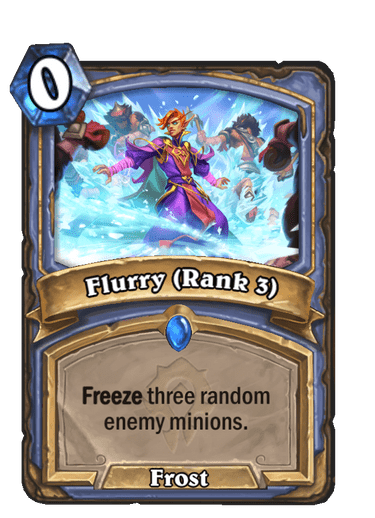 At Rank 1, Flurry is a worse version of Freezing Potion, which never saw play. The Rank 2 version isn’t worth waiting for either. Much of the value in freezing minions is lost when you don’t control what’s frozen, and freeze synergy available in the card pool doesn’t really entice us to run a sub-optimal card. This is a very sad Ray of Frost, and we give it a hard pass. 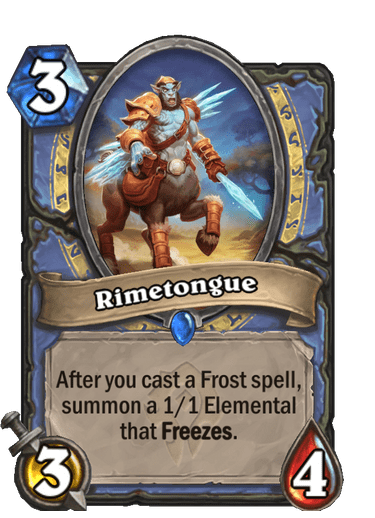 This card with a very narrow condition (frost spells aren’t abundant or very good), yet its tokens aren’t dramatically better than a vanilla 1/1. When you also compare this to Veteran Warmedic, it doesn’t line up favorably. Paladin has so many good holy spells it can use to activate the card, while summoning more stats to the board, and we don’t even expect that card to be good. Rimetongue is a mana cheaper, so it has that going for it, but it requires support of spells that are of far lower quality. 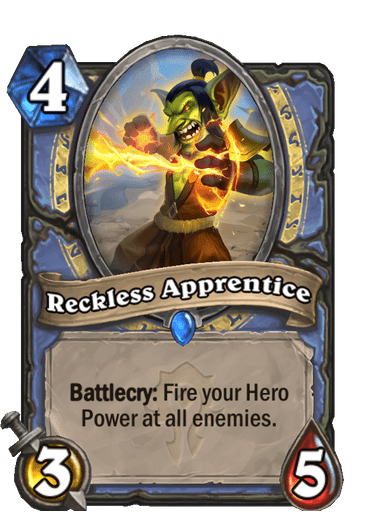 This card offers strong support for a Mage deck focused on its hero power, as it works well to activate Mordresh, but fixation on that deck could also blind us to its potential as a defensive card in other Control Mage decks. A 4 mana 3/5 that casts Arcane Explosion (that also goes face) is a decent card by itself, even without the hero power being upgraded. Could have some use. 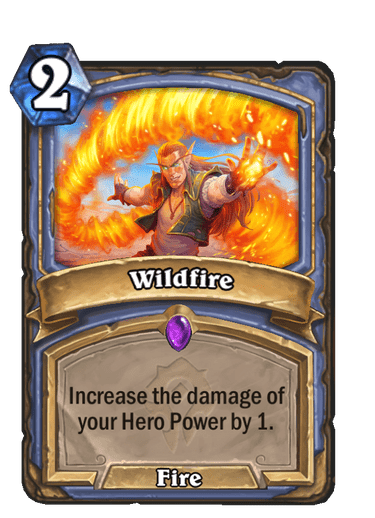 The primary enabler for a Button Mage deck, but this spell isn’t great on its own. It’s basically a 2-mana Shadowform, which is certainly not a good enough card by itself. If Button Mage pans out, this card will see play. If not, it might have difficulty finding a role. 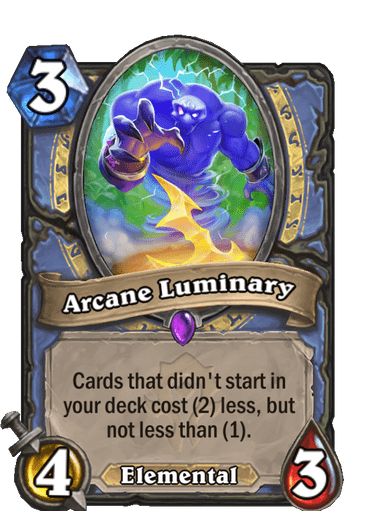 A Sorcerer’s Apprentice that costs 1 more mana, only works on generated spells and has its cost reduction capped to 1? We’re not sure what purpose this card serves other than reminding Mage players that their favorite 2-drop is gone. Painfully bad. 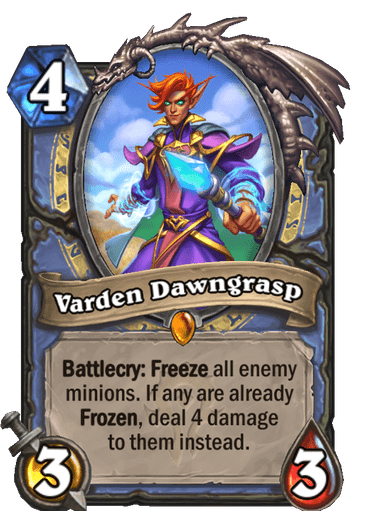 A 4 mana 3/3 that casts Frost Nova is a strong tempo play, and Mage decks are very likely to be interested in such a powerful stalling tool. The added Ice Lance utility doesn’t interest us that much since it forces us to run a card of the quality of Flurry. Thankfully, we don’t need it for Varden to be good. 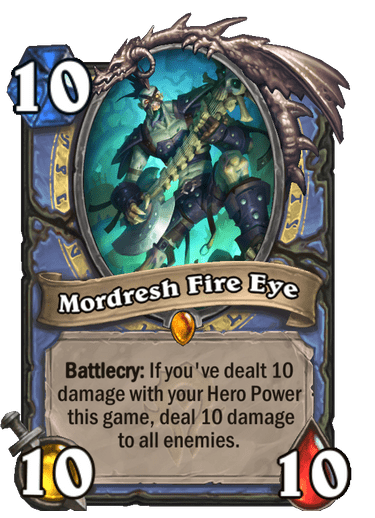 The Button Mage finisher. Mordresh makes for a very powerful turn 10 play that is pretty much guaranteed to wipe the opponent’s board while dealing 10 more damage to its face. That is strong, but is it truly a “finisher” in all matchups? Defensive control decks will still be able to remove it and survive, but perhaps the inevitability of a 3-damage hero power will prove to be a problem for them too. It depends on how consistently we can find Wildfire. We can see it working, but we can also see it falling flat on its face.

Mage is carrying a lot of question marks heading into the Barrens, as we think its set is underwhelming and the massive losses it incurs in rotation are going to be costly. It was the class we struggled theorycrafting the most, as we didn’t particularly like any of its potential decks for this expansion. We hope we missed something, but the options available to the class just don’t appear to be powerful enough compared to other classes.

It starts with an archetype that is getting the most noticeable support for this expansion: “Button Mage” has one big problem, which is its ability to draw Wildfire consistently. If it can’t draw Wildfire then nothing about the deck functions well enough. Mordresh might be a strong finisher in some matchups, but defensive control decks should have plenty of options to clear it. This deck needs more inevitability.

Secret Mage may have received a couple of strong cards in Arcanologist and Oasis Ally, but the deck’s early game is still very weak, and it doesn’t have a single 1-drop we’re happy to play. That’s unacceptable.

Spell-Damage Mage has the most frustrating problem of not actually being able to leverage its spell-damage into actual damage! It loses Arcane Missiles, while Runed Orb is not even a good burn spell when compared to Frostbolt. Feels incomplete.

Spell Mage has historically been a meme. Refreshing Spring Water is one of the strongest cards in the Mage set and works perfectly for this archetype, but is that enough to lift it to competitive play?

Jaina needs to spring up some surprises or she could be in for a rough time.