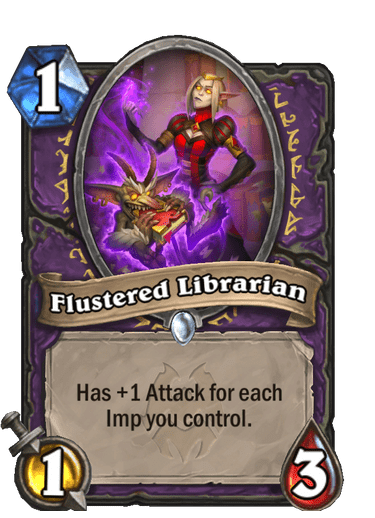 1 mana 1/3 with further, unlimited upside if imps are on the board. This is regularly going to have 2-3 attack, which would already make it the best 1-drop in the format ahead of Vicious Slitherspear, and we’re not even talking about situations where we play Fiendish Circle or Wicked Shipment and see our 1-drop deal 4-5 damage to the opponent in one swing.

You can’t ask more from a 1-drop: a massive threat that requires an immediate answer at any point in the game or suffer the kind of damage you shouldn’t be seeing from a 1-drop. This is a snowballing card akin to Tunnel Trogg and Mana Wyrm and we think players might be underestimating just how silly this could be. 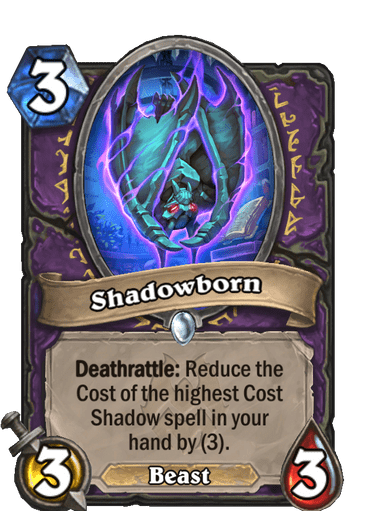 Weak initial body with significant mana reduction potential. Shadowborn seems to work best with the next card we’ll discuss, but mana discounts should generally never be written off. You can think of Shadowborn as a 3/3 that pays for itself later if you build your deck in a certain way. That’s solid. Not something we would be eager to play in an aggressive deck, but if you’re building up to a certain power spike, this can be good. Other shadow spells worth noting are Dark Alley Pact, Abyssal Wave and Twisting Nether. 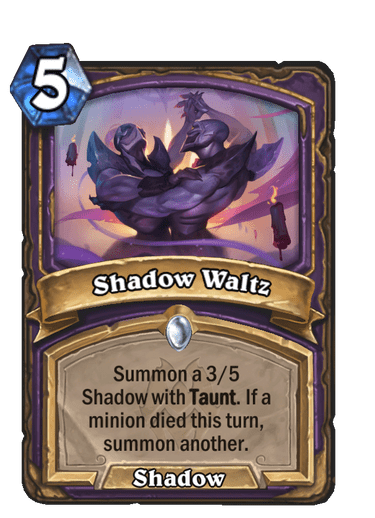 This card is obviously strong when it’s activated, giving you two Sen’jin Shieldmasta’s for just 5 mana, but it’s a bit awkward to play on curve since you need to have minions in play to ram into something. Later in the game it can be paired with cheap removal to give you a strong defensive swing (this is activated by any minion dying, including the opponent’s), and it can be cheated out early thanks to Shadowborn’s discount. Has great synergy with Lady Darkvein. 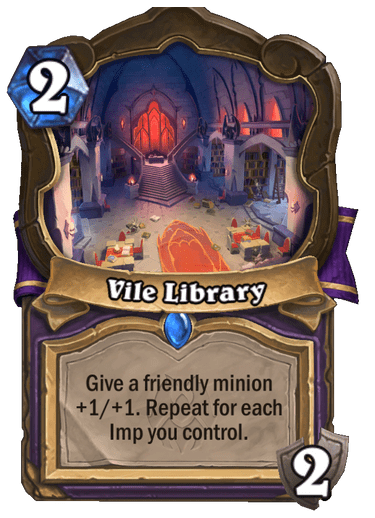 This imp support Warlock is getting is just incredible. A two-charge buff that scales with the number of imps you control, when it seems so effortless to flood the board with them thanks to this set. If you control two imps, a single charge of this buff is already strong enough to be a decent constructed card. Fiendish Circle follow-up to Library makes a 6/6 and three 1/1’s on turn 3. Just seems cracked. It’s impossible to leave up imps on the board without risking losing on the spot against a Vile Library deck, and Warlock has the capability of jacking up huge stats that would be impossible to prevent too. 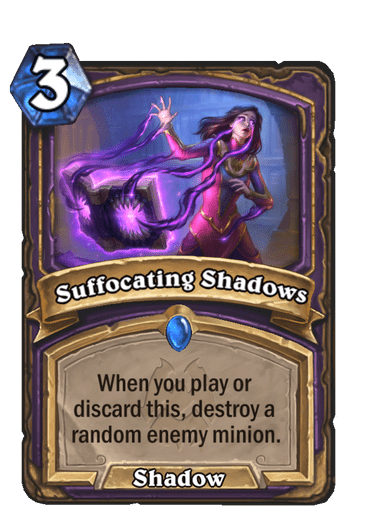 This card’s introduction seems a bit random. Warlock doesn’t have notable discard synergy to go along with it and the effect just isn’t that great, relying on your opponent to have a minion in play that would be significant enough to remove, and randomly at that. We never play Deadly Shot, and we don’t have a strong way to discard this, so this is a skip. 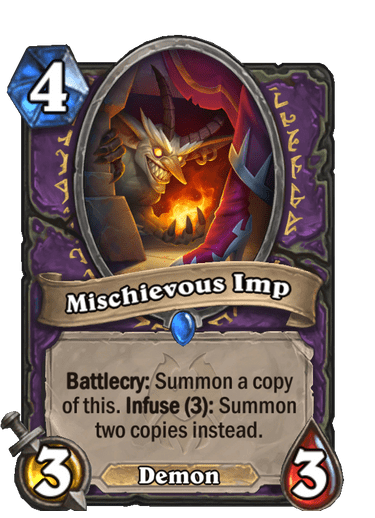 Another good imp card. This isn’t even bad at its baseline, but the infuse requirement is so forgiving in a deck that’s all about swarming the board that it should be activated often on curve, in which case you’re developing 18 stats for 4 mana. Works like Saronite Chain Gang, which means it scales hard with hand buffing synergies if that ever becomes relevant again in Zoo Warlock. Works extremely well with Vile Library, Rafaam and Impending Catasrophe. 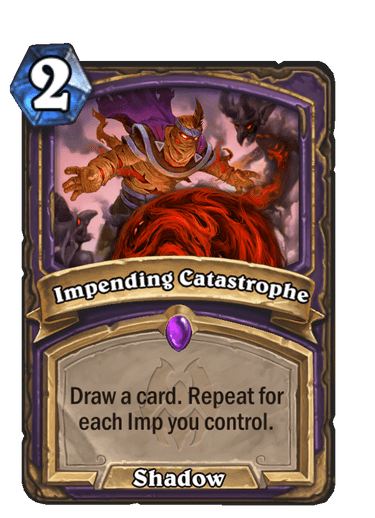 This is one of the strongest draw engines we’ve ever seen. It’s almost hard to believe how cheap this card is and how many cards it can potentially draw. One imp on the board and it already draws 2 cards for 2 mana. Play this with a baseline Wicked Shipment and it draws 3. Play it with Fiendish Circle and you’re drawing 5 cards for 5 mana.

Impending Catastrophe is so pushed that we believe it will see play in every Warlock deck. Not just some aggressive imp deck. Every Warlock will be playing Wicked Shipment and Fiendish Circle to combo with it, and it also makes Runed Mithril Rod enticing once again after the loss of Backfire. 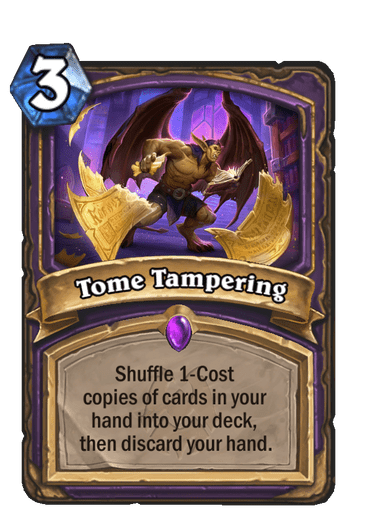 The other weird card in this Warlock set. So, let’s say we’re playing a “Big Warlock” deck with a lot of expensive threats. We tap a bunch of times and then play Tome Tampering. We then proceed to hope that one of the cards we’ve shuffled is quickly drawn and we can somehow get back into the game. To conclude, this card is highly optimistic in the current format. You don’t have a Malchezaar’s Imp that could formulate a potentially powerful combo with it. It’s going to sit there in the collection until some day, a weird new card is introduced that somehow works with it. Suffocating Shadows isn’t it. 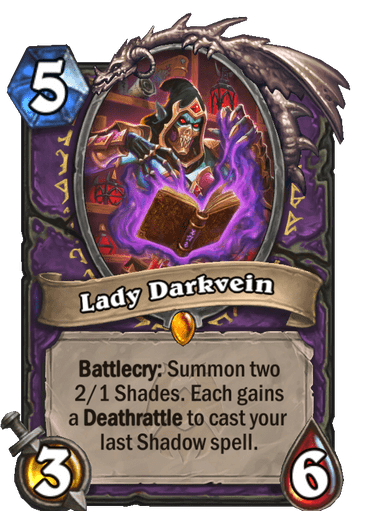 This is another card that looks very scary, especially with Dark Alley Pact and Shadow Waltz. You’re looking at potentially a Jandice Barov on crack if you have the right set up for it, producing an insane number of stats for very little mana. The issue is, of course, whether you can have the right setup for it, because if you don’t play Darkvein immediately after the target shadow spell you’re building around, you might miss your window of opportunity and play a cheaper removal shadow spell that doesn’t work great with it.

Still, it’s likely more than good enough to be played in Curse Warlock to provide you with additional copies of Dragged Below and Abyssal Waves. It might help bring about the return of Handlock. This is a card we think could become meta defining, but we’re not sure it’s a hit right off the bat. Might be a matter of time. 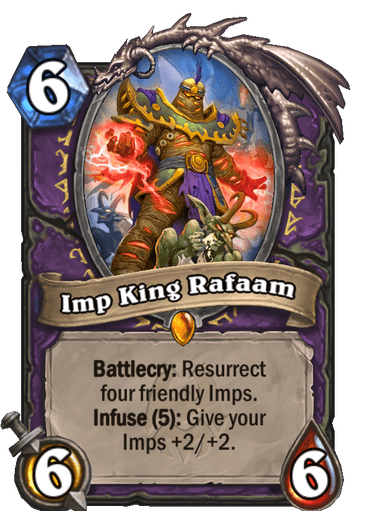 Rafaam is the cherry on top of the Imp cake… and this cherry is delicious. This 6-drop provides an already strong number of stats at its baseline, considering that many of the imps that Warlock plays aren’t necessarily 1/1 tokens. The fiend from Dark Alley Pact, for example, is an imp.

But if this bad boy gets infused, the card becomes an enormously backbreaking pile of stats that’s going to end games on the spot in many matchups. Even if we take the worst-case scenario in which Rafaam resurrects a full Fiendish Circle, you’re looking at a minimum of 36 stats (!!!) on a 6-drop. This is the bare minimum for an infused Rafaam.

Much like most of this Warlock set, Rafaam is a card that’s hard to believe exists in the context of the format.

It must start with Impending Catastrophe. This card has an appropriate name, because it’s an impending catastrophe on any opponent watching the Warlock draw a billion cards for 2 mana. Catastrophe is going to be the backbone of every Warlock strategy going forward. It makes Backfire look like a Whelp Bonker. Unreal.

And then we got the aggressive imp package. Flustered Librarian is going to deal 10 damage in some games, while Vile Library seems like a card that will produce more stats than Blessing of Authority in the average game. Imp Warlock’s aggression will be swift and brutal, and it will demand the opponent to clear its board every turn or risk getting rolled over.

The reload potential is also insane, with Mischievous Imp just being your average 4 mana 9/9 and Imp King Rafaam building a N’Zoth board on turn 6. Everything about this deck seems ridiculous and it’s a major threat for Malfurion specifically. We do think there will be some classes that are well equipped to deal with imps, but the deck’s ability to go tall and wide at the same time should make it difficult to respond to.

But an aggressive Imp deck isn’t the only thing the class is looking forward to. Phylactery Warlock is licking its lips after suffering through an entire expansion with a scuffed Multicaster draw engine. Catastrophe is going to make Runed Mithril Rod dangerous again. Even Curse Warlock has a chance to do better with such an insane draw engine.

The shadow spell package seems more “moderate” in power, but even this package features Lady Darkvein, which could just turn into the new Jandice Barov and bring about the return of Handlock. Something could be cooking there.

All in all, the Warlock set is a massive injection to the class’ options and possibilities. That’s what tends to happen when you get good card draw. Consistency rises across the board, and decks feel better to play.

A Warlock failure is impossible, or at the very least, highly improbable.