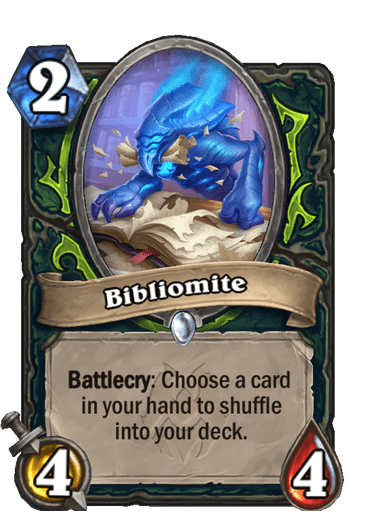 In terms of pure stats, you can compare this card to Felstalker (old Succubus) and notice it is much better. The extra health makes it very hard to remove in the early game. You get to choose which card to ‘discard’ from your hand, and its drawback can be offset by both Magnifying Glaive and Kryxis. Requires a very specific Aggro Demon Hunter deck but should be good in it. 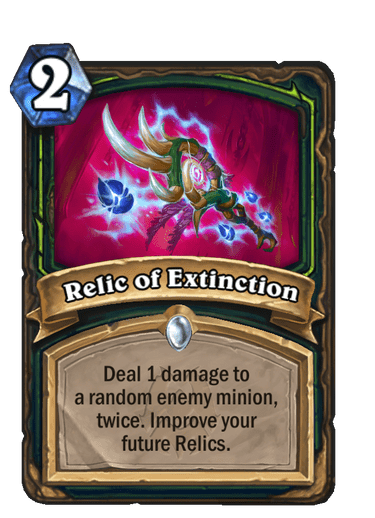 Relics are hard to evaluate by themselves, as they’re pretty much part of a 9-card package that requires all cards to be played together due to the way they scale. The rule of thumb after looking at them is that the first Relic played is weak, the second is a card that is tolerable but wouldn’t be worthy of a constructed deck, and the 3rd relic starts getting reasonable. This is true for Relic of Extinction.

We will remind you that there was a package that worked very much like Relics in terms of scaling. It only started to get good once you played the 3rd card. It was the infamous Jade Golem package. Admittedly, Jade Golems were all about threat generation while Relics offer a utility role, making them far less consistent. They’re a complimentary package to a deck, offering a secondary win condition without defining or limiting the deck they’re played in. 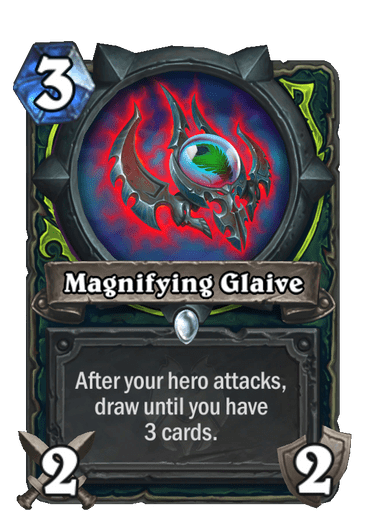 This weapon is worth two Voracious Reader effects, which is an incredible deal inside a 3 mana 2/2 weapon. If an aggressive Demon Hunter deck that runs ‘discard’ effects becomes successful, it will be mostly thanks to this weapon, which allows it to draw up to 6 cards for just 3 mana. We can even see new experimentations with Quest DH driven by it. Warps deck building. 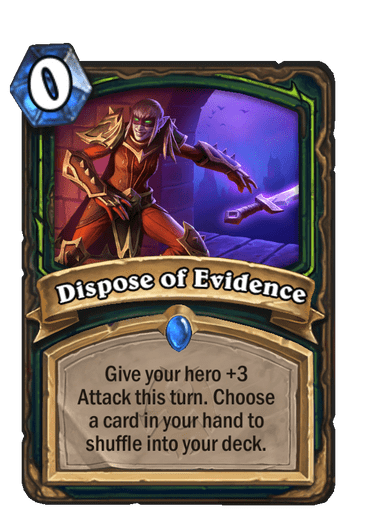 3 damage for 0 mana is pretty nuts. The card is comparable to old school Soulfire, and that was one of the strongest damage cards we’ve ever seen. This card doesn’t bypass taunts and deals 1 less damage, but it’s in a class that synergizes well with attack modifiers such as Multi-Strike. You also get to choose which card to lose from your hand. An aggressive Demon Hunter will always play this with Magnifying Glaive, but we wonder if the card is so good that it starts to leak into other archetypes. More versatile than Bibliomite. 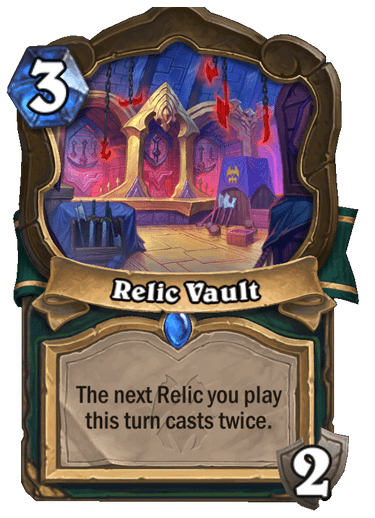 Significantly boosts the scaling of Relics. The big advantage of it being in a location form is that you can bank the mana for future use and there’s no reasonable way for the opponent to stop you. Particularly strong with Relic of Dimensions but can also help you make a huge board with Relic of Phantasms once you reach the late game. 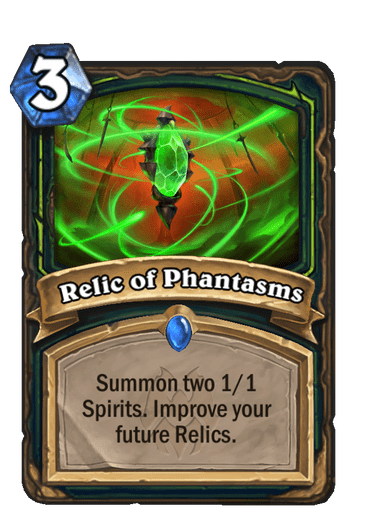 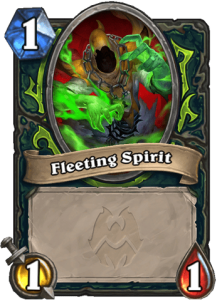 Starts getting ‘good’ (Double Agent, Naga’s Pride) once we’re on our third relic. This card offers the ‘threat’ in the Relic package and can help us infuse Xy’mox. Again, if you’re expecting relics to be the cornerstone of a deck then you might consider them underwhelming, but as a package of cards you shove into different shells, they might do some work. 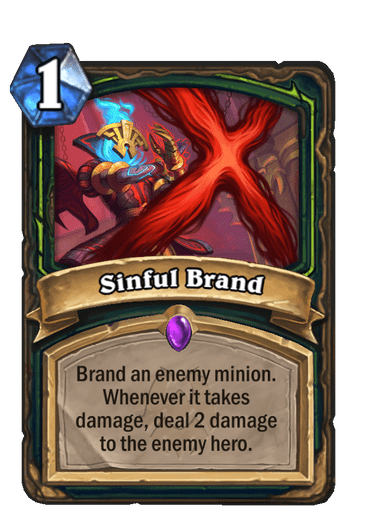 This card is too situational. It requires the opponent to have a big minion on the board and for you to control multiple minions. But, this raises an important question: If such a state of the game presents itself, why are we trading all our minions into the opponent’s? Unless we’re blocked by a taunt, our minions should be going face, which also happens to…. deal damage to the enemy hero. So, when this card is ‘good’, we still shouldn’t be playing it! 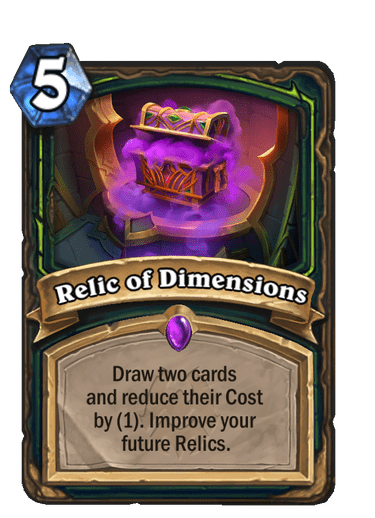 This might be the strongest card in the relic package. Can scale very quickly into an unconditional Skull of Gul’dan level card and has great synergy with Relic Vault. It does require our deck to be expensive enough to take advantage of the discount it offers. Otherwise, we might be better off doubling up Phantasms for the threat potential. 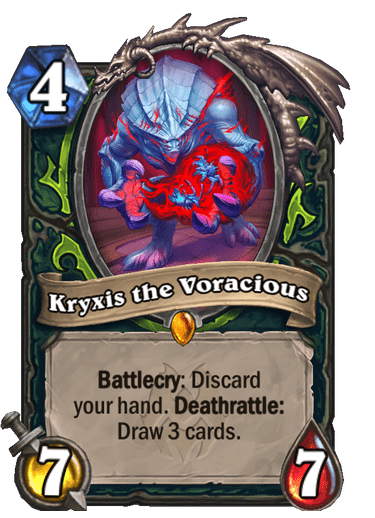 Kryxis strikes us as a good fit for two archetypes. The first is an aggressive Demon Hunter deck that runs Magnifying Glaive. It serves as a 3rd reload tool since we’re already encouraged to empty our hand and minimize Kryxis’ drawback. The second is a Deathrattle Demon Hunter since it’s an incredible pull off Razorfen Beastmaster and Death Speaker Blackthorn. It’s a 4 mana 7/7, so how bad can it be? 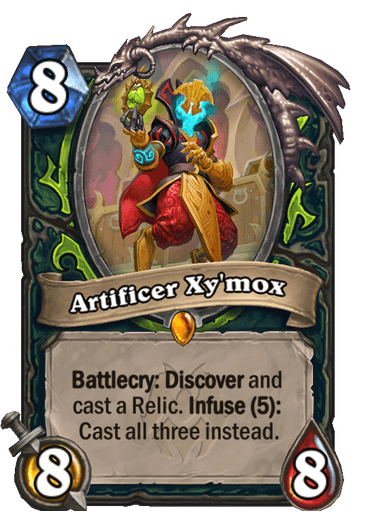 The “Jace” of Relics. Xy’mox doesn’t have the absurd damage potential of Jace, but it can provide a very big swing turn since it’s fueled by the rest of the package. The main issue is the infuse requirement, which might push Relics into board-based decks, since you never want to cast just one relic. It does help to have Relic of Phantasms to infuse it. Pretty good to discount with Relic of Dimensions too.

Here we are, underrating Demon Hunter again? But can you blame us? The class has been descending to the point of stagnation through the 2nd half of Sunken City and is getting a set that doesn’t exactly strike you as a sure thing.

We do like the support for Aggro DH. Magnifying Glaive is the kind of card that can elevate an archetype almost by itself, and it wouldn’t be shocking to see the deck return and thrive once again. It will be interesting to see how it ends up adjusting to a different playstyle, where it will be far quicker to dump its cards. The concern is that such “all-in” decks could face some inconsistencies in their game plan. We need to dump our hand for Magnifying Glaive but what if we do that and not draw it? And if we dump our hand quickly, are we utilizing our cards as well as we could?

The Relic package is another concern. Its late-game scaling seems good, but the early game could be painful. You might end up drawing Relic of Dimensions before the other two relics and find yourself scratching your head. It’s a package that’s not hard to fit into different strategies but may not necessarily improve the decks it goes into. The good news is that if Relics do end up being a disappointment, they are very easy to buff, and it’s very likely that they will be buffed should they underperform. See Librams.

Both Fel DH and Deathrattle DH could go for relics. Fel DH isn’t as good of a fit for the package on paper but didn’t seem to get upgrades elsewhere. The ability to Brann/Jace already exists thanks to Mailbox Dancer and Fel DH was not interested, so does Kael’thas change anything by allowing it to come down on turn 9? Deathrattle DH is a better fit for relics but is an archetype that has been left behind by more powerful packages.

Demon Hunter should be okay, with Aggro DH the most likely deck within the class to become a genuine menace, but if it doesn’t… the class just doesn’t seem that hot.