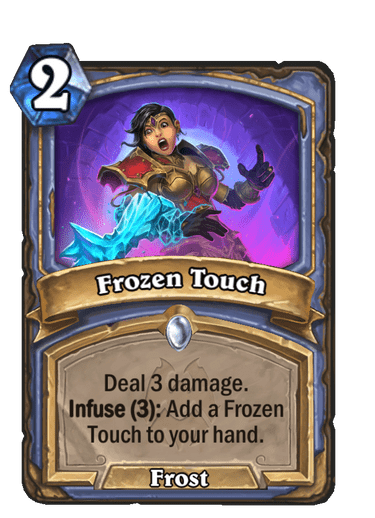 Darkbomb at its baseline, which recycles itself at every infuse. At 3, the infuse requirement isn’t very restrictive. Even if Frozen Touch is infused once, you’re already getting a split Fireball.

It’s hard to expect Mage to swarm the board to an extent in which this represents ‘infinite’ damage, but this is a strong card for any minion-dense Mage deck, like a Skeleton Mage or Mech Mage. Over a long, drawn-out game against a slower defensive opponent, dealing 9 or 12 damage through a single card can be a huge deal.

Bound to see some play. 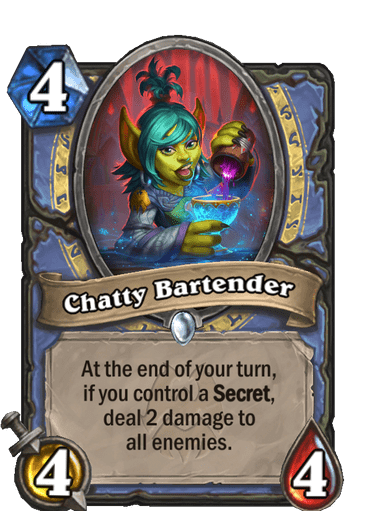 We’ll be very surprised if Mage utilizes secrets in this expansion. Chatty Bartender is not a terrible card, but it doesn’t make a deck, and a potential secret package in Mage just doesn’t seem powerful. In some decks, a secret package would be purely anti-synergistic.

The effect is solid. We can set Bartender up with Anonymous Informant to play a 0-mana secret on the same turn, preventing the possibility of our opponent triggering our secret before we drop Bartender. It’s okay, but we need more support for this (and we kind of don’t want it). 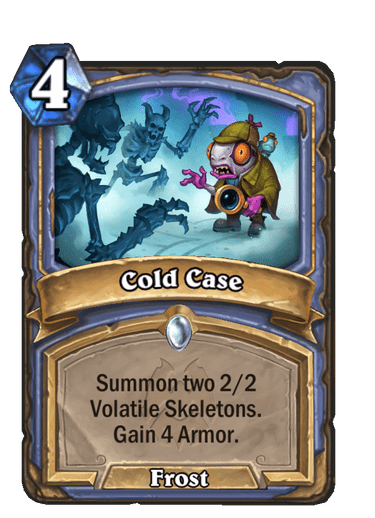 This card is strong both individually and as a crucial piece to several potential strategies. Summoning two Skeletons on top of 4 armor is a good deal for the mana cost. This is a frost spell, so it’s a big boost to a deck that runs Multicaster and Magister Dawngrasp. Mage has been crying out for a frost spell that has a consistent effect and doesn’t require the opponent to have a minion in play. And finally, this is the 2nd best enabler in the set for Kel’Thuzad.

Almost guaranteed to see some play based on these possibilities. 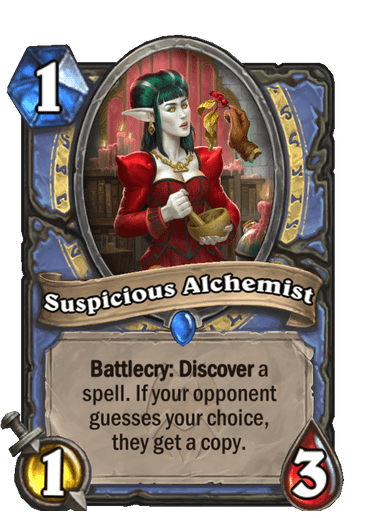 A 1 mana 1/3 with some potential upside. As a turn 1 play, this can be solid and lead to some mind games. You could argue that in a specific matchup, a card that you want isn’t something that your opponent is necessarily interested in. You can pick an AOE spell vs an aggressive deck, for example.

The problem is that this “mind game” loses some relevancy once the game goes late. If you play the spell on the same turn you dropped Alchemist, then your opponent will always know what you picked. This makes it worse in slower matchups unless the spell you pick proceeds to kill the opponent.

In addition, Mage is currently very picky on generated spells because its archetypes heavily utilize Magister Dawngrasp and don’t want to “dilute” their spell pool just to play a 1 mana 1/3 with a non-guaranteed favorable outcome. Most will pass. 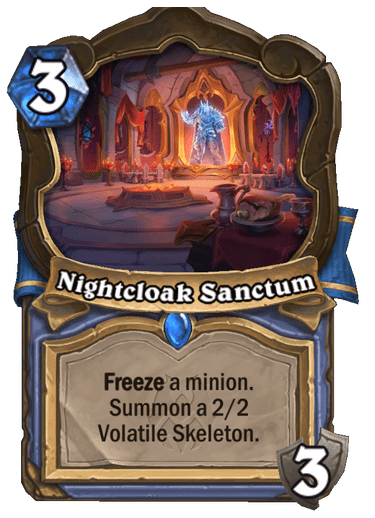 One of the strongest locations in the set. Guaranteed stalling and board development that’s worth significantly more than the 3-mana invested. It’s hard to see Mage decks passing on this one unless they’re purely aggressive. Best enabler for Kel’Thuzad, but likely to see play in Mage decks that don’t even care about Skeleton synergy. This is an amazing card for Big-Spell Mage, for example.

If you play this on 3, you’re going to win more Hearthstone games. 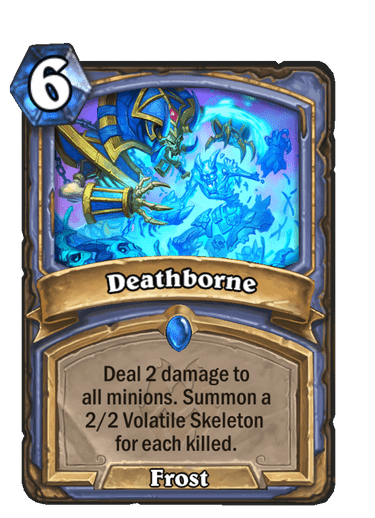 This card would have been fantastic at 5-mana as a very threatening follow up to Cold Case, but the card was nerfed late in development to 6. This makes the efficiency of this card much more questionable. A 2-damage AOE for 6 mana is just very, very slow and it makes us less optimistic about the viability of a full-blown Skeleton Mage. Think about how underwhelming Abyssal Wave is and remember that Deathborne deals half the damage. The one factor that could help Deathborne’s case is the popularity of imps. 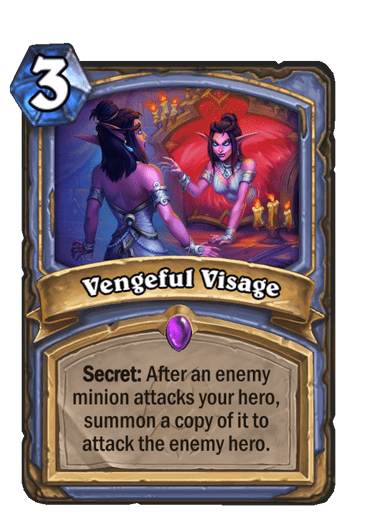 This card is an absolute waste of time. The effect is arguably worse than Wandering Monster considering it does nothing to protect you from damage, and if you’re the aggressor, Visage is basically never going to activate at a relevant point because your opponent is mostly worried about clearing your threats. A nerf to Orion and he wasn’t even released, the poor guy. 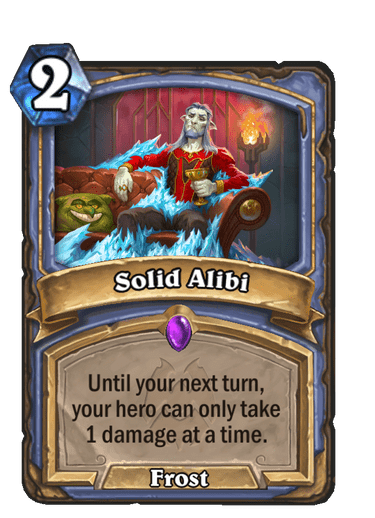 This card resembles Cloak of Shadows, Time Out and Ice Block in the sense that it can buy you a turn. It’s just nowhere near as good at doing that since it’s not very effective against wide boards. Interesting to replay with Magister Dawngrasp but we need a very good reason to put this card in our deck and we don’t see it in the current format.

If we ever find a deck that wants this card, that deck will probably get nerfed. 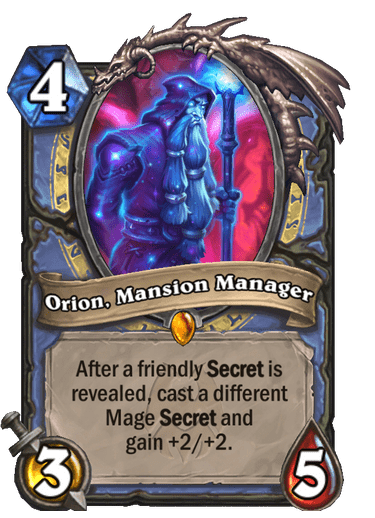 This legendary can be set up in a similar way to Chatty Bartender, with a 0-mana secret you prepare with Anonymous Informant. Orion can be annoying to deal with in theory, as it essentially protects your secret from being triggered. Your opponent will have to guess what secret you played and hope to remove Orion cleanly. A minion trade into Orion with Oasis Ally up can be disastrous, and the same is true for spell removal when Counterspell is up.

The problem is, of course, the reliance on your secret either being discounted or your opponent not triggering a secret you play on turn 3. This somewhat clunky setup makes us skeptical, but Orion isn’t as terrible as it may seem. A single trigger on the card can be game winning.

We don’t think Kel’Thuzad requires a heavy investment of the skeleton package to be a good card, which is why we think he has a good chance of seeing play. It’s enough to play one copy of Sanctum and Cold Case to already reach a similar effect to Blastmaster Boom on-curve. Then when you consider the late game scaling, the ability to copy or repeat Cold Case, and the potential of a Brann/Kael’thas combo, Kel’Thuzad can certainly offer a worthwhile win condition.

Spooky, scary skeletons. Just how spooky are they? That’s the main question on our minds when it comes to evaluating the Mage set. The Volatile Skeleton package is one that could be built around aggressively or be used as a complementary package to another win condition. We tend to favor the latter and think it shouldn’t be difficult to accomplish.

The most enticing archetype that could incorporate a Skeleton package is Wildfire Mage. Since the archetype already utilizes Multicaster, it should welcome the boost in the power of frost spells thanks to Cold Case and even Deathborne, which could be further copied by Commander Sivara and replayed by Magister Dawngrasp. With the deck already possessing a strong closer, Modresh could be joined by Kel’Thuzad as another top end threat.

Another approach would be to go for a full frost build, with higher minion density and Frostweave Dungeoneer. This deck would lose the off-board damage of Wildfire but have a replacement with Frozen Touch. A minion-dense skeleton build could push a single copy of Frozen Touch to deal 9-12 during a drawn-out game. We think this aspect of Frozen Touch could be underestimated.

Of course, we can’t ignore Big-Spell Mage, one of the most successful decks in the current format. However, Big-Spell Mage isn’t gaining too much from this set and could find itself facing a stronger and high-powered field. Nightcloak Sanctum will be useful, as it will help basically every Mage deck out there. We think none of them will pass on this location.

Where are things a bit shakier? Secret Mage. We want to like it, but we can’t get behind it. This archetype had some good times in Hearthstone’s history, but attempts to bring it back to Standard over the last couple of years haven’t been fruitful. Frozen Touch will give it some burst. Bartender and Orion are good snowballing 4-drops but they require setup. Some of the neutrals (Stranger, Informant) could help with that setup, but we’re just not seeing what’s so scary about this deck. It’s certainly not as scary as those skeletons.

Freezing minions as they appear and form in a line.

They’ll screech and cry as they explode, dealing damage in their path.

Finding lethals with Kel’Thuzad will require a bit of math.