The Light! It Burns! 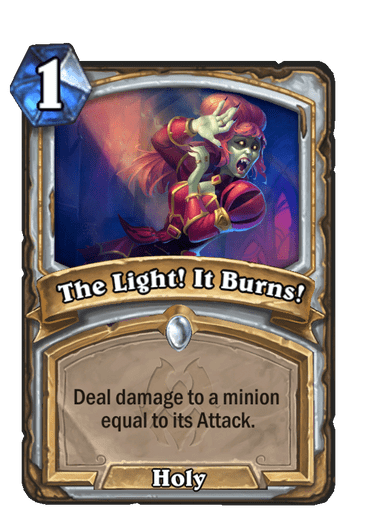 This card compares favorably to Holy Smite. Holy Smite might be stronger against some early game minions with low attack values, but this spell scales much better into the late game, being able to deal with giants at ease. Priest decks that focus on survival should be interested. Just a useful addition to the class’ removal toolkit. 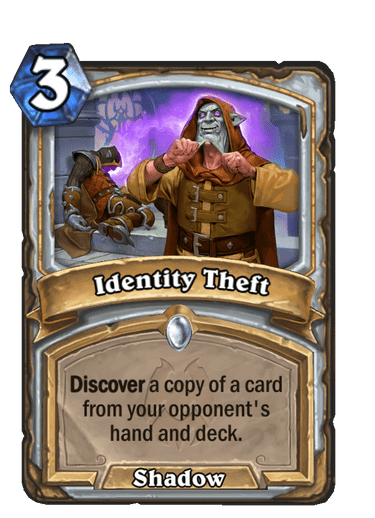 Value engine for a Thief Priest deck. This archetype looks very questionable on the surface, as it doesn’t have a clear win condition beyond grinding out the opponent to dust. It’s very likely that it will encounter strategies with an inevitable late game that are going to make a mockery of its resource assembly. Unless tech cards somehow solve its issues, which isn’t too likely either, we won’t be holding our breath. Quest Priest has better competitive prospects. Should be fun and nothing more. 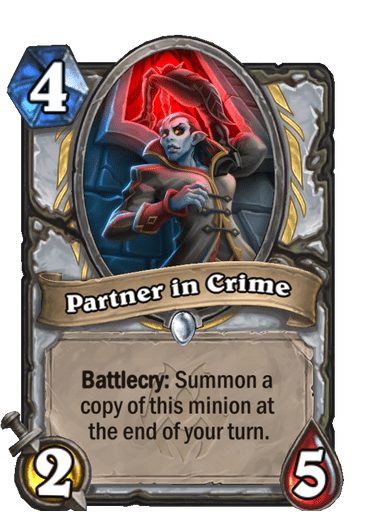 This 4-drop’s baseline numbers are just ridiculous. Two 2/5’s for 4 mana is already quite strong but on top of it, being receptive to buffs on board and in hand just makes this card hard to believe. The synergy with Cathedral is particularly alarming. Two 4/6’s on turn 4 can shut down the opponent from having any semblance of board control. Whether it’s playing aggressively or defensively, nearly every Priest deck is going to want this two-card combo. 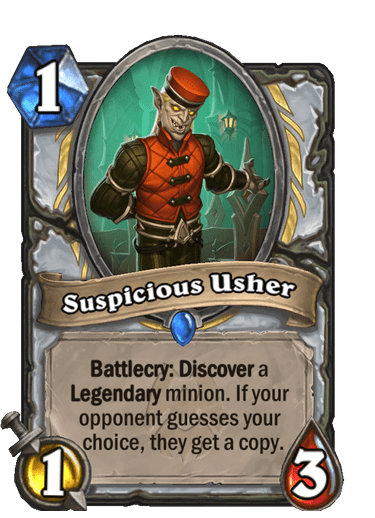 Akin to Suspicious Alchemist, a 1-drop with value and some potential upside. Much like Alchemist, the effect is one that doesn’t really synergize with any game plan you might have in your deck, as it’s a generic value card. Fast Priest decks have better options for early game minions, and slower Priest decks don’t value early board development that much. Might be destined for the Thief Priest deck but should have niche applications. 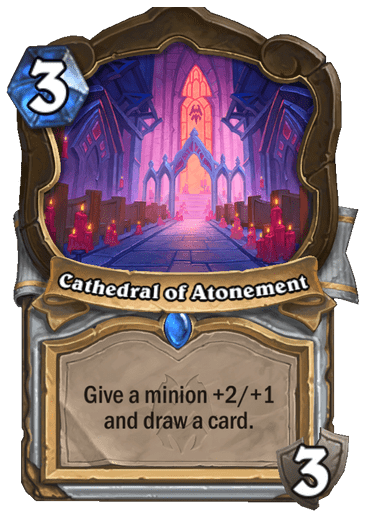 This is our call for the best location of the set. Cathedral should be amazing for any kind of Priest deck because it packs an incredible amount of value and stats in a 3-mana package. This is three copies of Hand of A’dal in one card, for just one extra mana. This is amazing both for aggressive and defensive Priest decks, because it allows you to either snowball an early game minion or set up a turn 4 swing. Blademaster Samuro’s stock is rising with this card. Partner in Crime looks like a terrifying prospect. Blademaster Okani sounds highly irritating. Priest’s card draw options have turned into some of the best in the format within two sets this year. Almost a must-include in every Priest deck. Only Boar Priest may not care about this. 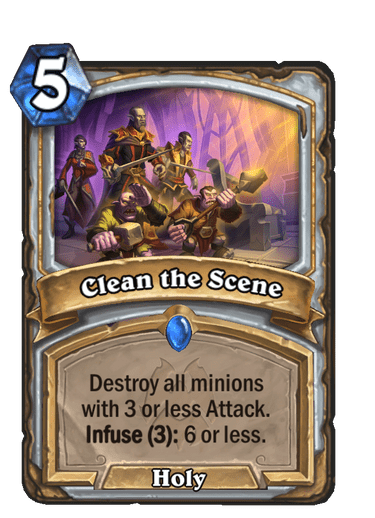 This card is already solid at its baseline, being able to remove most early game board development. Its infuse requirement isn’t highly restrictive either, and it turns into an incredible board clear that can deal with pretty much anything besides giants. This card instantly goes into Quest Priest and makes that deck better since it curves out early minions anyway and desperately needs another good turn 5 play. We expect other defensive Priest decks to be interested. It’s just good, efficient removal. 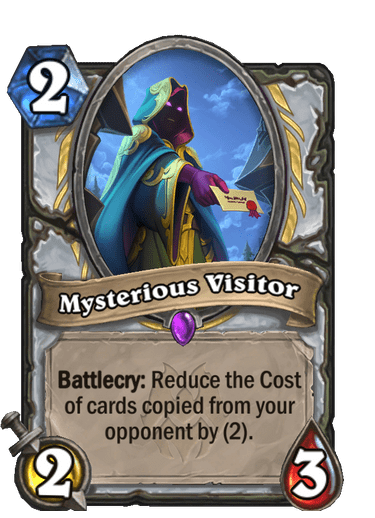 If you stock up on enough Thief Priest cards, you can discount your generated cards with Visitor and try to outpace your opponent. Good stats for the ability but the effect isn’t relevant for most strategies. Goes into one questionable package and shouldn’t make much noise elsewhere.

Boon of the Ascended 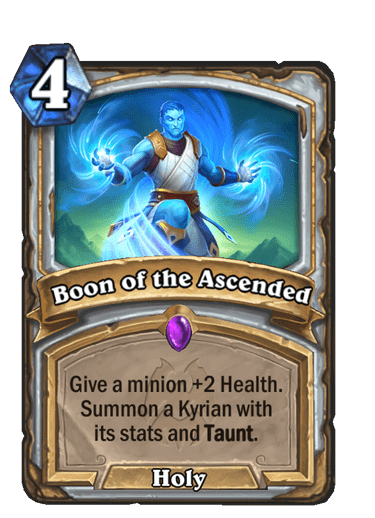 First, let’s mention that this doesn’t work with Pelagos to create two 8/8’s on turn 4. Only Pelagos will be an 8/8, while the Kyrian will have 1/8 stats. After saying that, let’s compare this to a very similar buff: Psyche Split. Psyche Split was a 5-mana buff that gave the same amount of health, an additional +1 attack, and copied the minion but without giving it taunt.

Boon doesn’t copy the target so if its static effect stacks, it’s worse than Split. But if we only care about board development and stats in play, it compares quite favorably considering it is cheaper and provides us with a taunt. Psyche Split did find its way into a deck, and we think Boon has a decent chance of doing the same. 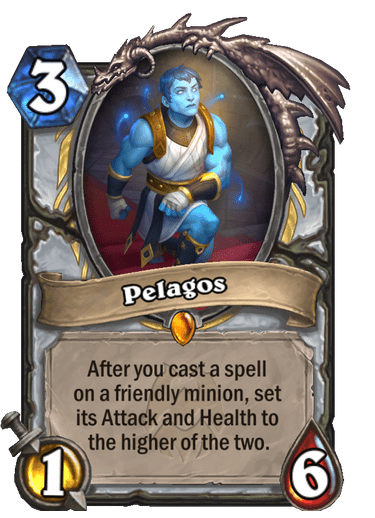 This card just looks busted. A single Serpent Wig on Pelagos and we have a 4 mana 8/8 with almost no effort whatsoever. Its aura effect can lead to some ridiculous turns when buffing other minions in play. At 3 mana, having 6 health makes it hard to remove when it’s dropped on curve. It’s just a massive threat that the opponent can never ignore, or risk games spinning out of control. Reminds us of High Priest Amet and should have a similar effect on the viability of Bless Priests. Absolute powerhouse of a card.

The Harvester of Envy 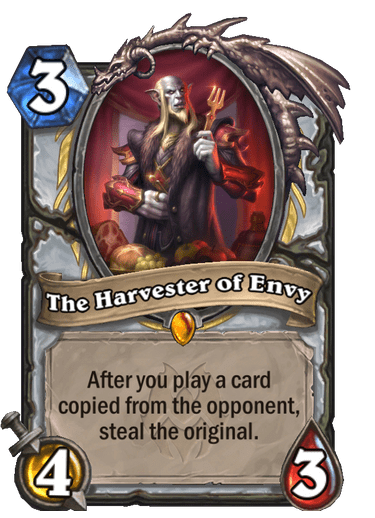 The cornerstone legendary of Thief Priest and boy does it fit the archetype perfectly. Costs 3 mana and is required to be on the board when you play the copied card, which means it is difficult to chain yoink your opponent’s cards unless they got discounted by Mysterious Visitor. This does steal minions in play, which is cute, but Harvester’s combo seems slow and unreliable. Will see a lot of play for fun, but we doubt it will become competitive.

Priest’s set is a good mixture of janky fun and uncompromising power. The combination of Partner in Crime, Cathedral of Atonement and Pelagos forms the star trio of the set and a massive boost in the threat potential of board-centric Priest decks.

You don’t have to look beyond Naga Priest to find an archetype that would be an ideal fit for these cards. Cathedral gives it more card draw while allowing it to press an advantage, Pelagos is both a snowballing threat as well as a finisher, and Partner in Crime is a massive threat that’s going to make it very difficult for the opponent to deny the Priest from having board.

Denying board from Naga Priest is the key to beating it, which brings us to our next question. We know this deck hasn’t seen much play during Sunken City despite being very powerful at one point. If it ends up powerful at Castle Nathria, will it finally become a highly visible deck?

There are other options too. We could see some experimentation with Shadow Priest utilizing Cathedral and Partner in Crime. The deck has disappeared after rotation but could come back with these new additions as well as some pieces in the neutral set.

When it comes to slower Priest archetypes, Clean the Scene is a card that should see a lot of play. It is the perfect addition to Quest Priest, and since this archetype is minion-centric, it should love Cathedral and Partner in Crime, as well as some big additions from the neutral set. Watch out for Forensic Duster and Sketchy Stranger.

Thief Priest is where things look a bit sussy. This deck seems destined to annoy many players, but perhaps not win too many games. The grindy playstyle may seem a bit futile in a powered environment, though there are some disruption tools available to it that could help in matchups against high lethality late game decks.

At the very least, after experimenting with building the deck, it looks like a lot of fun. If Priest ends up having good decks and fun decks, then we can consider the set to be a job well done.