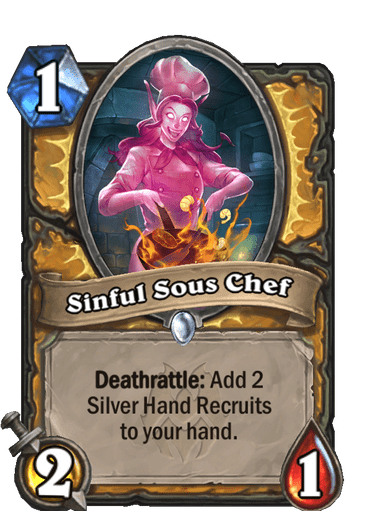 This card is just good value. The initial body is weak, but it gives you some hand fodder that can be useful for several synergies, such as Elitist Snob. At worst, you get to drop these recruits the next turn and fight for board. Best case scenario you get to Promote a 4/4 on turn 2. Should see a lot of play in the class since it’s thirsty for 1-drops. 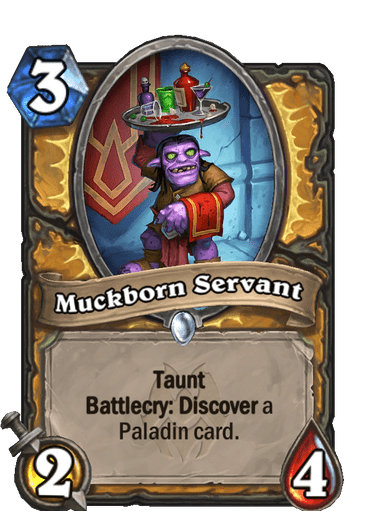 Another solid early game value card. A 3-mana 2/4 with taunt and discover is just good. The taunt is a big deal since you’re protecting yourself while maintaining resources. It allows you to find any Paladin card, including minions, so it can find you a threat in slower matchups or a reactive card in the faster ones. This makes it more likely to be included even in a proactive deck that likes to pressure. Compare this to Battle Vicar and this comes out on top. 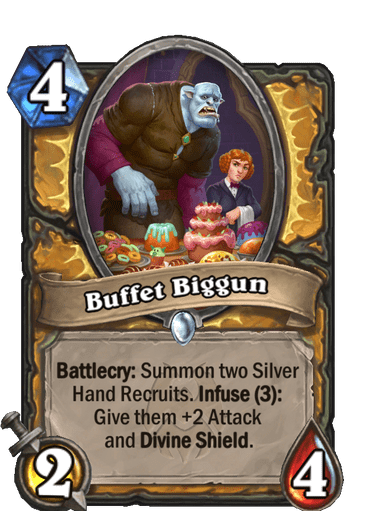 Probably the strongest Paladin card in the set. Its infused form is just nuts. Two Scarlet Crusaders on top of a 2/4 as early as turn 4 is so much pressure. Biggun generates 8 attack power that’s sticky and annoying to remove. It is certainly feasible to activate this on-curve, especially with Chef, but this is just strong at all stages of a game. Likely goes into every Paladin deck, Silver Hand Recruit synergies be damned. 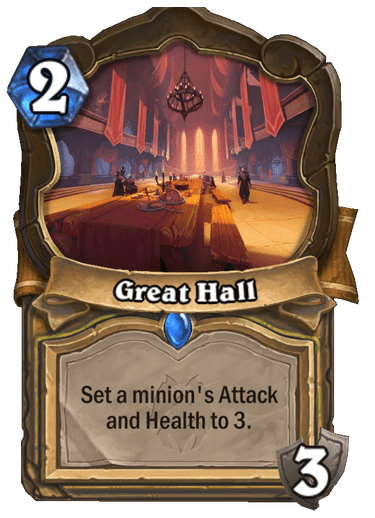 We’re not as high on this location as others because it isn’t “spammable”. You’re required to meet certain conditions for this card to be good. For your own board development, you need to have tokens to buff. Buffing a hero power is akin to playing a 2 mana 3/3, which isn’t great. In reactive form, you need your opponent to play big minions.

In defensive Paladin decks, this form of soft removal doesn’t compare to Equality or Righteous Defense, and we probably don’t have space for all of them. Faster Paladin decks value hand-buffing, so Great Hall doesn’t have good synergy there. Unless it’s an immediate follow to a 1-drop, it’s going to fizzle. If Dude Paladin becomes a thing, we like it a lot, but for now it seems lukewarm. 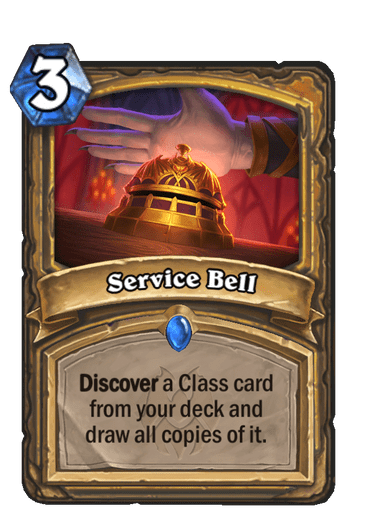 This card is…. Serviceable. You can use it to inject some consistency to a slow Paladin deck, but this isn’t much better than an Arcane Intellect most of the time. Can be nice to find your discounted Lightray, or just find your Cariel when you need it. Makes Renathal Paladin just a bit better for those who like adding 10 health to a class that’s already very good defensively. 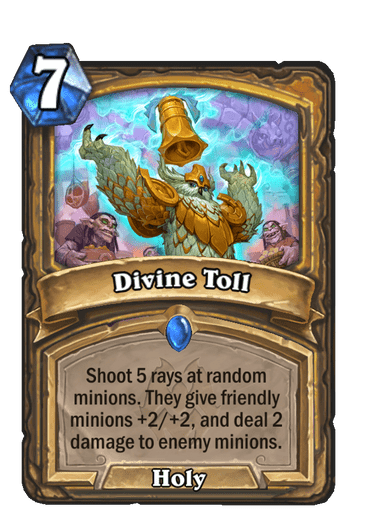 Sort of Mask of C’Thun for Paladin. Mask of C’Thun was viewed as a weak card in Mage before it turned into an important win condition for the class, because having a card with high damage potential can always lead to the emergence of successful strategies, which is why we think Divine Toll is underrated.

Yes, this card is weaker when your opponent has board and you don’t, but this is kind of the point. This is a card that greatly encourages you to be the fast deck and make sure you get under opponents, because if you successfully do so, you will win the Hearthstone game. The ability to deal 10 damage with a single small minion in play, while turning that minion into a massive threat, is a big deal. Passive opponents must clear all your stuff, and if you specialize in sticky minions with divine shield, that 10-damage bonk becomes increasingly hard to avoid. This card also has great synergy with The Garden’s Grace and Cariel Roame.

And then we look at the fast matchups, where this card isn’t as good, but is still useful enough to swing the board. More useful than cards that players put into decks to win slow matchups but do literally nothing in faster ones. This could surprise. 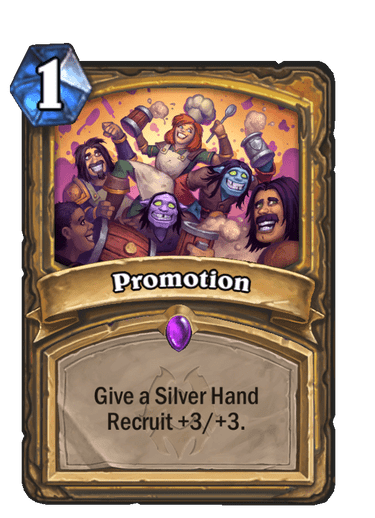 This card would be insane if Paladin had strong Silver Hand Recruit synergy in Standard. It probably instantly goes into a Wild deck, but for Standard it doesn’t have many opportunities to become a strong play.

There’s mostly Chef and Biggun. A turn 2 Promotion following a Chef’s death is pretty good. Sticking a buff on a Biggun dude with Divine Shield is also strong, and that’s it.

Any time you’re clicking your hero power to play Promotion, you’re playing a 3 mana 4/4, which isn’t great.  This becomes better if your dude is left alone and you buff it to attack instantly, but we really want more ways to summon dudes for a cheaper cost for Promotion to be truly great.

Likely gets stronger in future sets. For now, gets the tentative score. 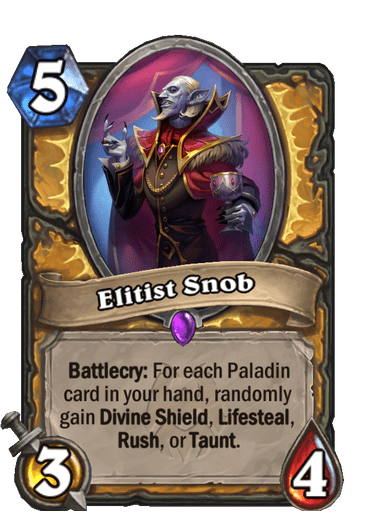 A non-legendary Zilliax for Paladin. This highly encourages you to go “Pure” Paladin, or at least come close to it because an Elitist Snob with all keywords is a hell of a swing play, especially when you take handbuff synergies into consideration.

The problem might be card draw more than anything else. If Paladin ends up gassing out and draw this late, it’s not going to have a good time. Thankfully, we’ve been given some cards in this set that help us maintain enough yellow cards in hand to fully activate Snob consistently. Should be played in many Paladin decks. 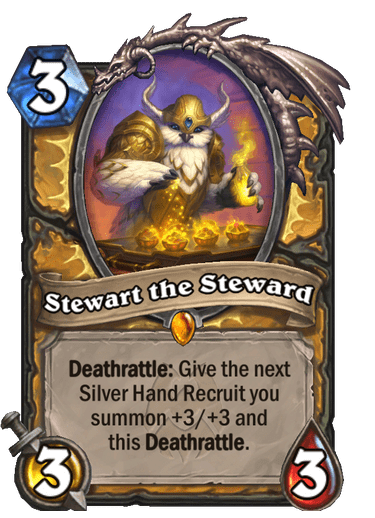 This card suffers from the same problem of Promotion. If we had many ways to cheaply summon Silver Hand Recruits, the consistency in which we can apply pressure through Stewart might get us somewhere. But this is a slow turn 3 play and unless we have an infused Biggun follow-up, we’re not particularly excited about this.

The incremental value can matter, but historically we’ve seen cards such as this one fail to make a good impression because slow, incremental, and predictable value falls to big swings. This card can also just be ignored by a passive opponent or silenced into futility. Give us more dudes and we might buy in. 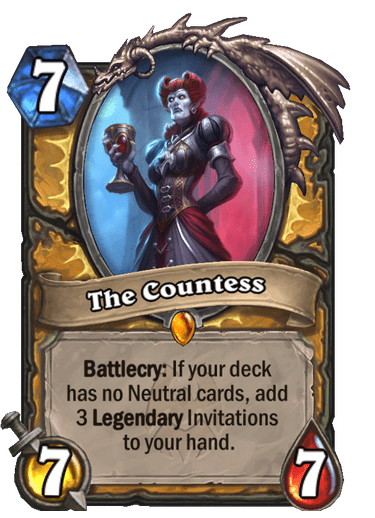 This legendary is excruciatingly slow. We’re investing 7 mana on a War Golem, and then investing 3 more mana in order play a discovered class legendary. That’s 10 mana, and 10 mana is a lot of mana in Hearthstone, especially if they do not guarantee to do anything for us.

The Countess is admittedly a better draw off the top and generates more value over time, but this card could have been stronger, and it wouldn’t be close to breaking the game.

Ironically, this legendary might see play because of Elitist Snob, but it’s also very reasonable to suggest that this card doesn’t beat Blademaster Samuro in a 1v1 duel when it comes to matchup importance. Certainly, it doesn’t make us lick our lips at the prospect of Pure Paladin v2.0.

The Paladin set is a good representation of the class identity over the last few couple of years. Powerful yet streamlined and one-dimensional. It may not seem so at first glance, but it’s actually very difficult to build Paladin decks that do new things that look powerful.

First, let’s look at the “dude package” cards. Chef and Biggun are great, but rather than bring about a new archetype, we think they’re most likely to slot into existing ones. Promotion and Stewart would be more powerful cards with more silver hand support, but there aren’t that many ways to leverage them currently. A dedicated Dude Paladin deck is very unlikely.

We’re being encouraged to play a Pure or near-Pure Paladin deck. Elitist Snob is a strong soft-Pure payoff card that would shine the most in a Handbuff Paladin deck, which is what Paladin has been doing for a while. Its consistency could be helped by Muckborn Servant and Sinful Sous Chef.

Divine Toll might become an alternative finisher for Pure Paladin since Mr. Smite and Battlegrounds Battlemaster aren’t available, but Countess’ value is questionable and sours the prospects of such an archetype. It’s the only card that demands no neutrals in the deck, so players might end up skipping it.

And then when we look at Holy Paladin, there isn’t much to add. Service Bell could be okay and it could go in a more proactive direction with Buffet Biggun, but there is no notable upgrade to the deck’s late game and that isn’t too promising.

Paladin could come out strong, as it tends to do, but what happens after is the question. We don’t see a lot of options for it to become consistently successful. It’s either strong and kinda boring, or just boring.