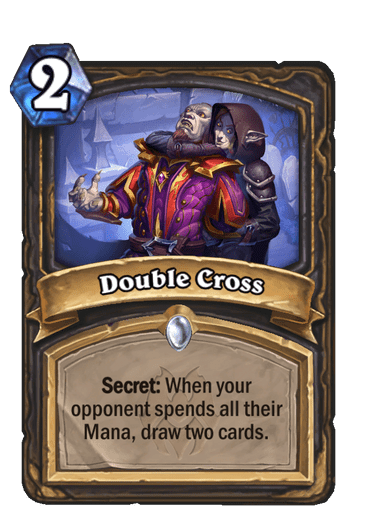 This secret is comparable to Dirty Tricks. Arguably stronger in the early game since mana utilization and efficiency is important for every Hearthstone deck while not all decks utilize spells in the same capacity. However, this card might be worse in the late game, especially against defensive decks that tend to drag the game longer. It’s easier to float a bit of mana compared to playing spells and have Double Cross sit for a long period of time.

Dirty Tricks wasn’t good enough to be a standalone card in a deck and neither is Double Cross. It goes as far as the secret package carries it.

Comparable to Cat Trick and might be slightly better if you’re not solely focused on face damage. Solid because secrets that generate board presence and pressure should provide decent upside to a shell. We’ll sound like a broken record, but no deck would ever touch this as standalone card. As solid as it might be, this card also goes as far as the package goes. 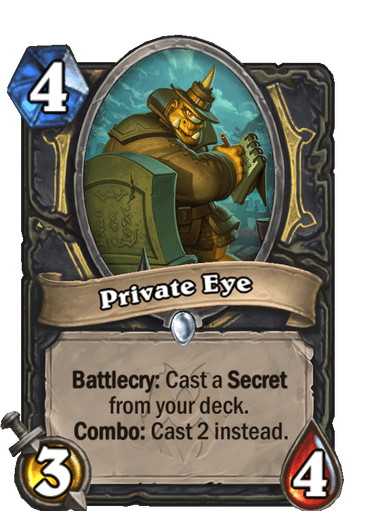 This is the card that’s most likely to make a secret package in Rogue viable. Insane on coin, and still powerful on turn 4 thanks to cards like Preparation and Bone Spike, Private Eye frontloads a lot of power when it’s played, which can levy a lot of pressure and disruption potential on the opponent.

So how big is a “good” secret package going to be? Are we making a Secret Rogue deck that’s completely dedicated to the package with 14-16 synergy cards, or are we shoving Private Eye and 4-5 secrets we never want to draw into an established archetype? The 2nd option is why we rate the card highly, because even if a secret archetype falls flat, Private Eye is still going to be there as an enticing option for many potential strategies. 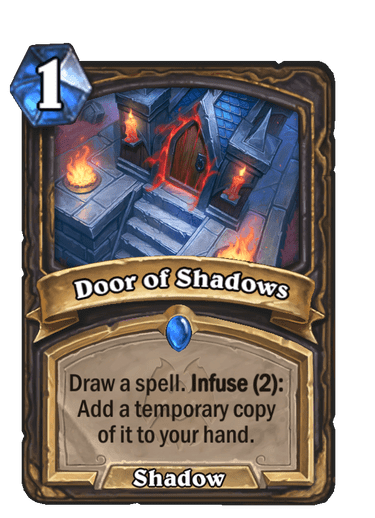 This spell isn’t bad at its baseline. A 1-mana cycle for spells is already a playable constructed card, and the infused form has a lot of potential. The requirement of (2) is very light, so Door of Shadows shouldn’t take too long to activate once it’s drawn even in Rogue decks that aren’t super heavy on minions. The upside of drawing a cheap spell to fuel Sinstone Graveyard or Necrolord Draka is clear. This card seems to be particularly powerful in a deck like Quest Rogue, where Door can specifically tutor Shadowstep or SI:7 Extortion, and these effects would be nuts when duplicated.

Considering the decent floor and high ceiling for the card, this should see play. 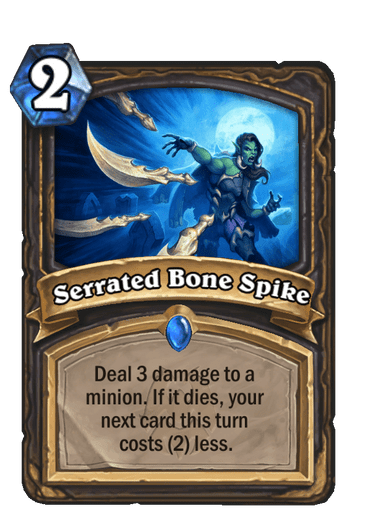 A Lunar Eclipse for Rogue, but even better than the Druid spell provided you hit the condition (and Lunar Eclipse was almost always used to kill a minion). This discounts any card, including minions, so Bone Spike can help you swing the board hard. It’s a very good combo enabler for Private Eye, for example. Preparation/Bone Spike is pre-nerf Innervate, and we can see gross turns in which we cheat out Trickster, Crabatoa or Shadowcrafter Scabbs in some situations.

It’s hard for us to think of a Rogue deck that wouldn’t want this card. It does everything the class wants to do. It swings the board, costs nothing, enable combos, potentially cheats mana… The perfect addition to Valeera’s toolkit and will be played everywhere. 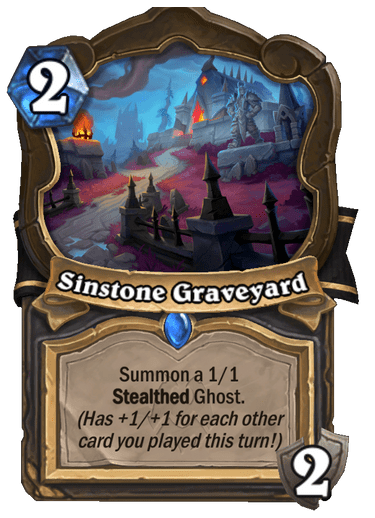 Biteweed didn’t make much of an impact, so Team 5 decided to print it in location form, with two charges, stealth, and the ability to bank its mana cost for future use. That makes it a whole lot better and almost a win condition by itself. Sinstone Graveyard is the kind of card that heavily incentivizes what Rogue already tends to do, which is playing multiple cards in the same turn. You don’t need to go too crazy for it to be worth the investment. Even making two 4/4’s with stealth already makes this a very good deal.

The ghosts having stealth turns this minion development into near-guaranteed damage. This card does require some deckbuilding work to maximize but it should see play, and if Rogue gets strong card draw options in future sets, it will become better and better. 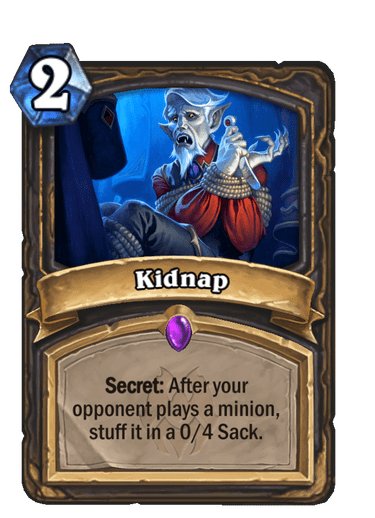 One of the most important aspects of Kidnap is that it does not negate Battlecries. The minion’s effect will resolve, and only then will it get stuffed into a sack. This makes Kidnap a poor man’s Okani, though admittedly it would seem a bit overpowered if it worked like Okani.

Kidnap is good at negating stat development, and if it comes out through Private Eye alongside Sticky Situation, that’s a lot of pressure on the opponent. The problem is that it’s very weak against spell-heavy decks and strong battlecry minions. If your opponent plays a minion in which the battlecry is the most important part, then Kidnap could backfire. There are many such minions, and they don’t have to be cheap: Xyrella, Najak Hexxen, Entitled Customer, Mordresh, Jace, Gigafin. If you’re playing against a Druid that just looks to ramp up into Scale of Onyxia, Kidnap does nothing.

And we also need to remember that kidnap is not great against aggressive decks that have a lot of 1-drops, in which case the value will be minimal. It’s mostly good against beefy decks. You will be happy for this to be played for free thanks to Private Eye. You’ll be upset to draw it. 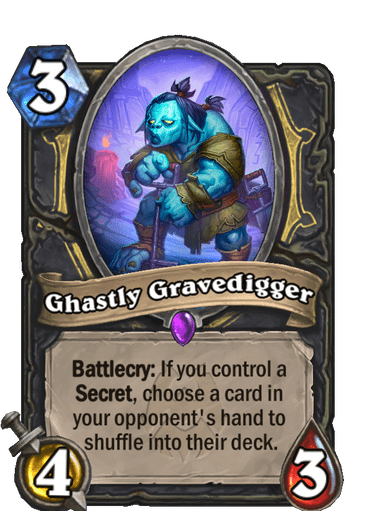 3-mana Star Student Stelina with an easier to meet condition is nice. Gravedigger is a form of disruption that can deny your opponent’s answers and power spikes, allowing you to further snowball the game in your favor. The stats are very aggressive for a 3-drop. One question is the card’s uptime. We might need to commit harder to secret synergies with neutrals like Anonymous Informant and Sketchy Stranger in order help this card become active more easily, and that further increases the slots we need to commit to the secret package, but perhaps Digger/Shadowstep is game changing enough to be worth the cost.

Far less of a sure thing compared to Private Eye. 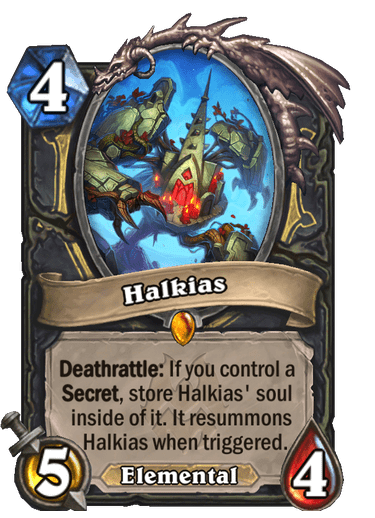 The cherry on top of the secret pie is… rotten. Halkias is depressingly bad, and it’s the card least likely to see play in the Rogue set. We’re not even sure a dedicated Secret Rogue deck plays it. The fundamental problem with Halkias is that it is worse than Private Eye on curve and requires a secret to be up before being played, or you’re strictly playing a 4 mana 5/4.

And let’s say everything lined up for you play Halkias. Your opponent can proc your secret and kill it. They can kill it and just not proc the secret, delaying its resurrection for multiple turns to the point its re-emergence isn’t as relevant.

This legendary also demands higher secret uptime than Gravedigger. If you draw this card at any point in the game and not have a secret up, you’ve just drawn a bad arena card. 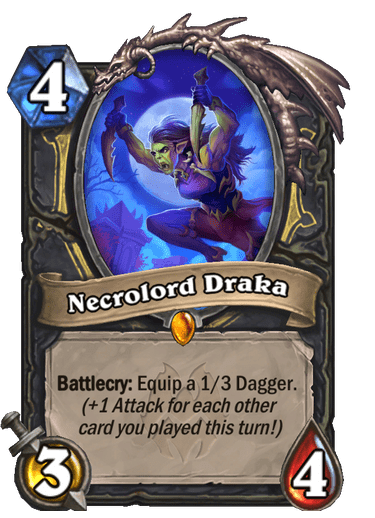 Draka might be the star of the Rogue set and can help formulate a win condition alongside Sinstone Graveyard to deal an absurd amount of guaranteed damage. But even if we let go of Miracle Rogue fantasies in which we play over 10 cards a turn (which could still end up happening), Draka is still strong when we don’t pump the dagger up in dramatic fashion. If we play two cards before playing Draka, then we get a 3/3 weapon alongside a 3/4 for 4 mana. That’s already good. Very good.

There is only one way to rate it.

Rogue’s set is very strong. The secret package is good because Private Eye is an extremely powerful card and it’s going to make every other card in that package better. The question is to what extent is the secret package going to be prominent. We can see this go different ways.

There’s one possibility that Secret Rogue is just an entire archetype, with the complementary neutrals, Gravedigger, and some finishers. The goal of this deck would be to outpace and constantly disrupt the opponent. Take away their answers, don’t let them develop minions, and close out the game with burst. Gravedigger forms an irritating combo with Shadowstep that might hurt a lot.

The other option is to shove Private Eye and 4-5 secrets into an existing deck, such as Thief Rogue. This package could be further expanded with Sketchy Stranger and Gravedigger, but the more secret cards you add, the more difficult it is for Thief Rogue to maintain its identity as well as its ability to close out games.

But even if the secret package completely flops, which it shouldn’t, we would turn our attention to the 4 cards in the set that aren’t related to secrets, and they’re all good. Draka, Sinstone Graveyard, Door of Shadows and Serrated Bone Spike are all fantastic additions to many potential Rogue decks.

Sinstone Graveyard and Necrolord Draka could bring about the return of Miracle Rogue, with the possibility of developing massive threats with stealth as well as Draka daggers that rival the Sword of a Thousand Truths. However, the class’ lack of card draw is likely going to force it to utilize the Auctioneer/Loan Shark shell that was first seen trying to make Garrote work back in Stormwind, before the Field Contact shell ended up taking over. Will it work this time?

Other Rogue archetypes are also lurking. Quest Rogue is going to strongly consider adding all 4 non-secret cards from this set into its build. Deathrattle Rogue got some very important neutrals that may help it challenge Bomb Rogue for Smokescreen supremacy.

So even though there’s a large secret package taking up a lot of space in the Rogue set, the class’ options are far from limited. This doesn’t feel like the Sunken City set when it was Pirates or bust, and once pirates got a nerf, we needed the Wildpaw Gnoll buff to salvage the class.

At worst, Wildpaw Gnoll is going to be the safety valve to keep Rogue relevant.