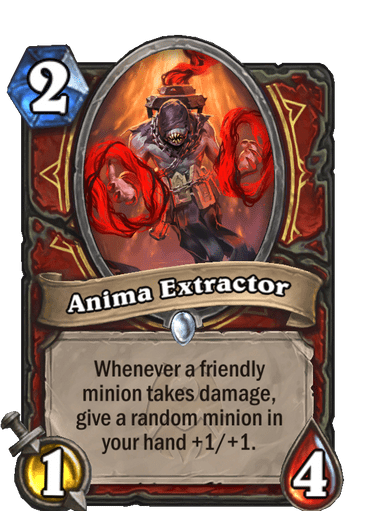 Armorsmith for handbuffs. The high health makes it difficult to remove in the early game, and it has obvious synergy with Sanguine Depths as well as various Whirlwind effects. There’s some skepticism on whether an Enrage Warrior archetype can return to competitive viability, but if it does, this would be one of its better cards as it can snowball games if not immediately addressed. Can also be part of some combo deck with late game shenanigans. 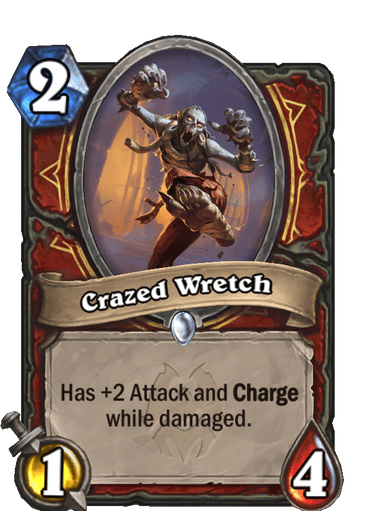 A useless baseline 2-drop that turns into an incredible charge minion when damaged. A turn 1 Sanguine Depths into Wretch is a 4/3 charge. Cruel Taskmaster on turn 4 makes a 5/3 charging Wretch. It has great synergy with Anima Extractor as well. One of the things we’ve learned throughout Hearthstone’s history is that the charge mechanic should be respected. Behind every charge minion, there was always a serious meta contender. Now, it’s possible that Wretch will not make an immediate impact when the expansion launches, but we would never bet against it becoming a serious player down the road. 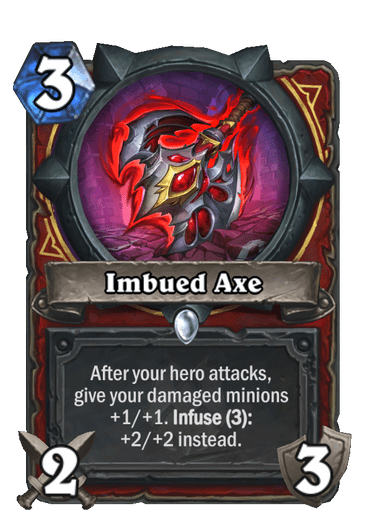 This is a significant weapon for an Enrage Warrior deck. Even at its baseline power, giving your damaged minions +1/+1 potentially three times on top of a 2/3 weapon seems strong. Its infused form is extremely powerful when combined with a Whirlwind effect and can spin out of control, though obviously the infused form will rarely, if ever, be activated on turn 3. This is more of a turn 5-ish weapon.

It does require a lot of self-damage synergies to fully maximize, but If Enrage Warrior becomes a deck, we suspect that Imbued Axe will be its scariest card, as it offers a legitimate win condition for the deck going wide. 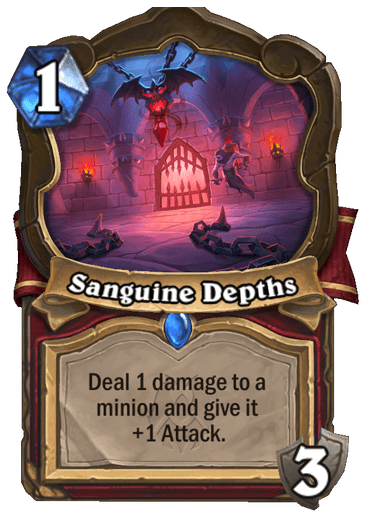 This location seems underwhelming and low impact compared to other locations, but Warrior should like this card. Having three damage pings for 1 mana in a class that carries a lot of ‘injured’ synergies is at worst, very convenient. There are some minions in the format that you might end up looking at differently because of the option to proc them on-curve, without the need of spending mana on another card. Should be a powerful card in Enrage Warrior and perhaps a more defensive version of that deck as well if that ever transpires. 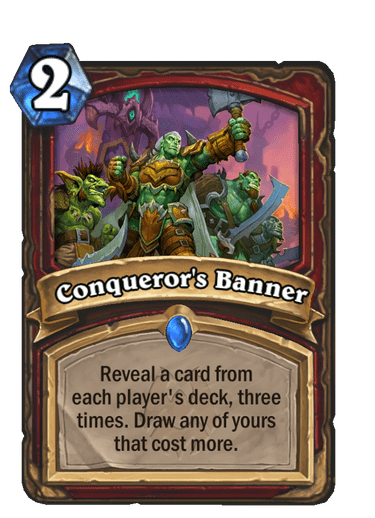 We have a big problem with this card. The first is that Control Warrior decks have a lot of cheap removal cards. The archetype historically doesn’t possess a greedy curve as it is important for its defensive tools to be available early. Even in a matchup against an aggressive deck with a low curve, this shouldn’t draw three cards most of the time.

And then in slower matchups, this card is extremely questionable. The floor of this card is too low. You can play Banner and not draw a single card, which pretty much loses you the game on the spot. This feels like Guess the Weight with higher stakes, and you have less control over it. In a game where we try to manipulate randomness in our favor as best as possible, we like to be in control of the situation. We’re not in control here. 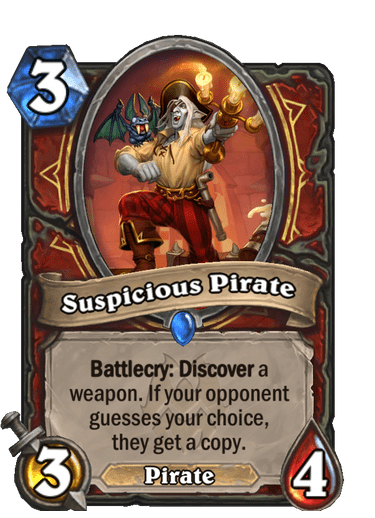 This sussy card is more expensive than the sussy cards in other classes and has a worse ability. It shouldn’t even see play in Quest Warrior, because that deck has no interest in spending mana on weapons, so its battlecry is a downside as you might hand your opponent a weapon while developing a Spider Tank. Seems unplayable. 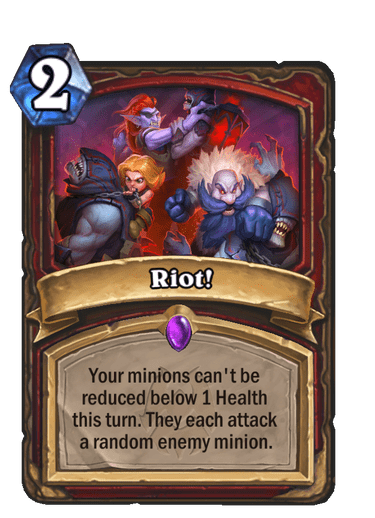 Commanding Shout meets Devouring Swarm. ‘Riot!” doesn’t expend a minion’s attack move, so this could be a way for Warrior to remove an opponent’s minion, damaging its own minions to set up an Imbued Axe, and continuing to push face damage. It works well at fueling cards like Frothing Berserker, Armorsmith and Anima Extractor. 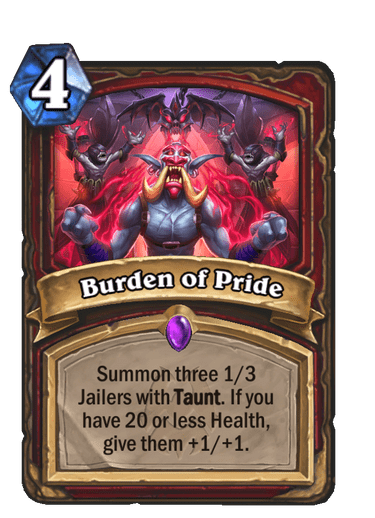 Being logical, Burden of Pride would be broken at 3 mana, so this does seem to be an appropriate cost for a card that offers multiple bodies as well as 9-health in taunt. This will rarely be in activated form on turn 4, though it might offer a great comeback mechanic in a fast matchup if you happen to find yourself in a losing position.

We could like it in an aggressive Warrior deck as it can protect minions such as Frothing Berserker and Anima Extractor, help you activate Imbued Axe while also offering a potential wide board to buff with the axe. We don’t like it as much in slower Warrior decks because of their armor gain, but we do have to respect its activated form when the Warrior is under any pressure. This card seems unplayable at first glance, but we can see it sneaking in. 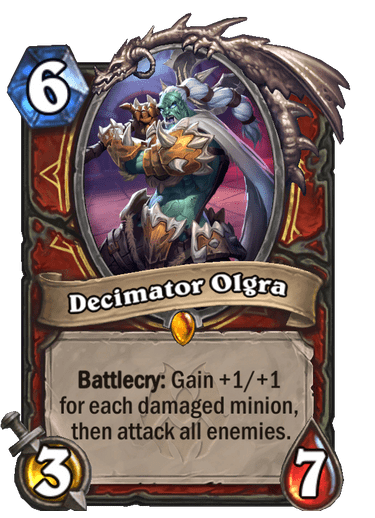 At its baseline, Olgra is a mini-Deathwing, Mad Aspect that also goes face, and she receives a buff from any damaged minions on the board, including the opponent’s. Seems like a versatile card that can either be used as a finisher, a payoff for having damaged minions in play, but also as a comeback/removal card.

We can see this card acting as Enrage Warrior’s “Mr. Smite”. Anima Extractor comes to mind to make Olgra hit harder. Gives some off-board damage to the deck along with Wretch. Not bad. 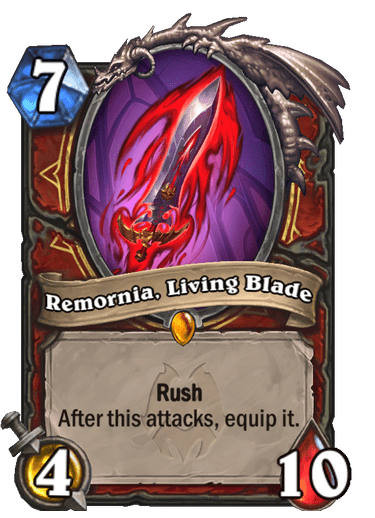 This minion comes into the board, hits an opponent minion for 4, jumps to your hand, you swing with the weapon, it jumps back to the board and rushes into another minion for 4. Very similar effect to Crabatoa at the end of the day, but with what is likely to be a worse body at the end of the chain and some awkwardness when dealing with large minions. Crabatoa can handle an 8/8 in play and stay alive as a 6/5. Remornia would have to die to clear the giant.

Considering the higher cost, Remornia is going to be a worse card in most situations. It does have some hand buffing synergy as an upside, allowing it to deal more damage while being more likely to leave a decent body to the board. Crabatoa is one of the best cards in the game and being worse than Crabatoa is far from being an insult.

We were generous with our evaluations of Enrage Warrior. We think it got some good cards and we’re convinced they will be meta contenders at some point in the future. Extractor, Wretch, Imbued Axe, Olgra and even Sanguine Depths are underrated pieces that could formulate a powerful deck.

The problem is that this deck has almost zero card draw. We’re talking about Acolyte of Pain and some desperate hypothesis of Whelp Bonkers. This means that it will be an all-in aggressive deck that will look to finish games by turn 5-6. So, we have an all-in deck with more powerful board development compared to Aggro DH but without the ability to reload. It can work but this recipe usually doesn’t constitute a strong enough deck. The deck might be a Battle Rage away from being great.

And then when you look at Control Warrior decks, you realize that the class got almost nothing relevant that could help this archetype close the massive power gap from the rest of the field that was formed after its nerfs. Control Warrior’s best card in this set is arguably Theotar or a worse Crabatoa. There is a hope that if the meta is aggressive, it can have a role, but this is an optimistic scenario.

We’ve never struggled to theorycraft decks in a class more than we struggled with Warrior this expansion. It’s very possible that we’re missing something. The Warrior set is very synergy-based, and deckbuilding related to the class could be more complex. Players might figure things out after launch much like they did in Ashes of Outland, when Enrage Warrior blew up a week or two after launch and became one of the best decks in the game.

Will Warrior defy our expectations like Demon Hunter did in Sunken City? Or is the class doomed to linger in the fringes of the format until it gets buffed a month after launch? We’ll find out soon enough.