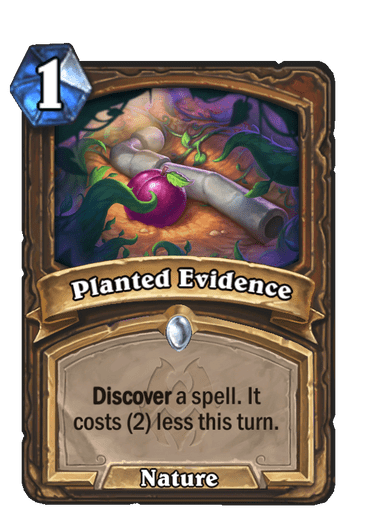 This card isn’t as good as Nature Studies. Even though the discount is very generous, it only applies to the discovered spell. This means we don’t have control over what spell we can potentially cheat out early. Still, this can offer some powerful options to help us get ahead so it’s certainly playable. Seems like a decent card in a deck centered on Topior because of the Nature tag. 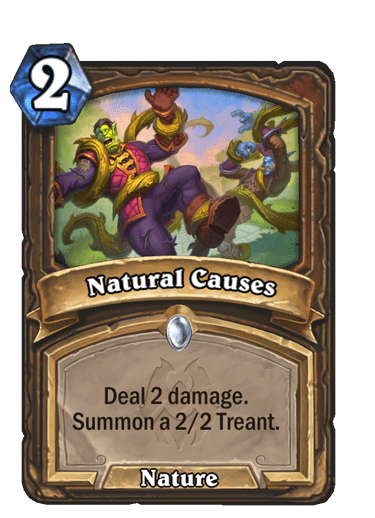 A 2 mana 2/2 that deals 2 damage in Nature spell form. Fogsail Freebooter without a condition. Nothing fancy but constructed worthy and can be used aggressively. Can work as early game removal in a Topior deck, or a faster deck running Herald of Nature. 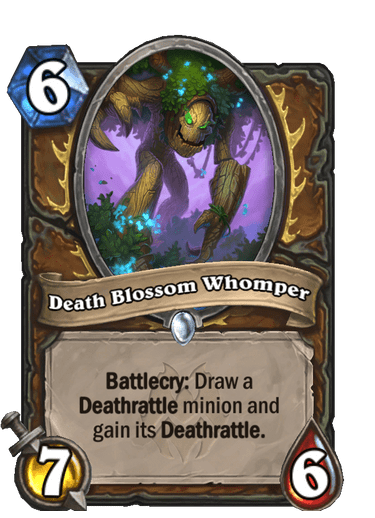 Necrium Apothecary was so good that it was nerfed. Whomper is slower at 6 mana but was released alongside a new ramp card in the set that specifically curves into it. Add Innervate and Wild Growth into the equation and Whomper can often drop down on 4. It has much better stats (hard to ignore with 7 attack) and can have its deathrattle activated immediately with a pre-set Hedge Maze acting as its Necrium Blade. We don’t expect it to break the game like Apothecary did, but its synergy with Sesselie and Stoneborn General looks strong enough to merit serious constructed consideration. Wouldn’t be shocked to see it blow up beyond these expectations though. 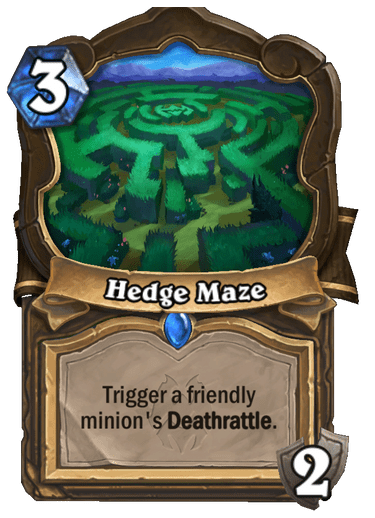 This is the big enabler for Whomper and one location that’s likely going to grow stronger in future sets because of how broad its ability is. Druid is now a class that is highly interested in deathrattles because the ability to bank mana and pre-emptively activate them can be very powerful as we’ve seen before with Necrium Blade. Not having any impact on the game beyond activation can make it seem worse than the weapon, but it can stay online much longer, has two charges, and the opponent doesn’t have a reasonable way to interact with it. 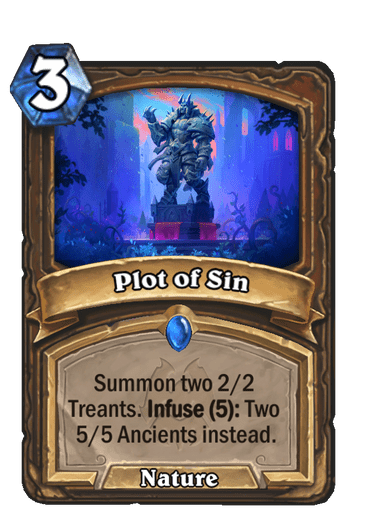 We’ll make a bold call and say that this card isn’t good enough for an aggressive Druid deck running Herald of Nature. The reasoning is that Landscaping, and other similar baseline effects, have proven to be inadequate for constructed format. For Plot of Sin to be ‘very good’, we need to infuse it, and infusing it seems like a very difficult undertaking at 5. If we keep this card in our opening hand, we will never realistically infuse it on-curve. We might be able to consistently drop this on turn 5, which seems pretty good, but what happens when this card is drawn at any point after the first couple of turns? Its activation will be so slow that it’s unlikely to have a positive effect on the game as it might be too late for a deck that needs to snowball early and can’t afford to hold on to a card that long. Where this card might be better is a slower deck centered on Topior, in which case you can afford to wait as there’s no pressure on you to close out a game early. 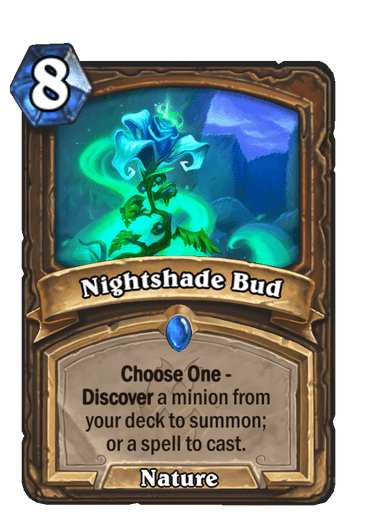 This card isn’t as scary as it looks. The fantasy of using it to cast Celestial Alignment or Convoke the Spirits sounds good, but Druid has a lot of spells in the deck and you’re certainly not likely enough to get to cheat out the spell you want. When it comes to summoning minions, this is very weak at 8 mana, especially when many key late game minions have powerful battlecries that are lost, and ramping Druids still want to play cheaper minions. This also clashes very hard with Jerry Rig Carpenter, preventing you from finding a split Nourish which is much more valuable. Nightshade Bud seems to be a better fit for Druid decks that imitate Big-Spell Mage: heavy on minions and light on spells. Might fall through the cracks. 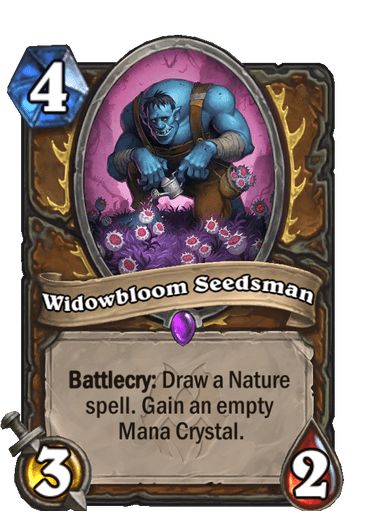 This is one of the best cards in the set and is pretty much guaranteed to see play for the next 20 months. Two busted cards merged into one card, Seedsmans is a 2 mana Wild Growth (one of the best Hearthstone cards ever) merged with a 3/2 that draws a Nature spell for the other 2 mana. No matter from which angle you look at it, it’s insane. Massive power boost for any ramping Druid deck. 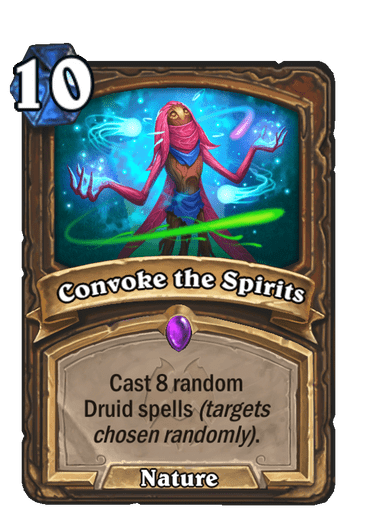 Puzzle Box for Druid, Convoke the Spirits was nerfed from 10 spells to 8 during development because it was probably completely broken. Druid spells are of higher quality and the absence of a mana limit makes it dramatically stronger than Rune of the Archmage. Since so many Druid spells make boards, Convoke is also going to be much stronger than Rune on an empty board. It’s likely better in any board situation and a card you’re going to cast with impunity. In a class with so many ramp options as well as Celestial Alignment? This is an absolute no brainer. 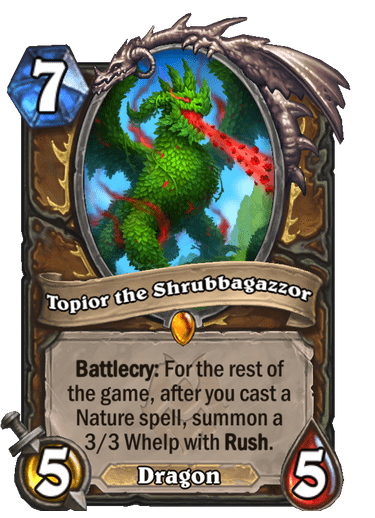 A 7 mana 5/5 is very slow, but the card gives major Mad Genius vibes of creating a situation in which it becomes impossible for the opponent to establish a board against the Druid from that point onward since their rush potential becomes insane. It’s already a challenge to deal with Onyxia and her scales, Topior turning every nature spell in the deck into removal sounds like a daunting challenge.

These rush minions are going to stack up and offset the initial loss of initiative very quickly. If you don’t kill the Druid on the turn Topior is coming down, you are doomed to lose the board quickly after. This is also a dragon, so it’s very likely going to fit in Celestial Druid since we want Kazakusan activators, and we don’t mind paying 1 mana for this effect. A pretty scary card that we’re going to respect. This kind of permanent game state is hard to appreciate until you experience it.

Sesselie of the Fae Court 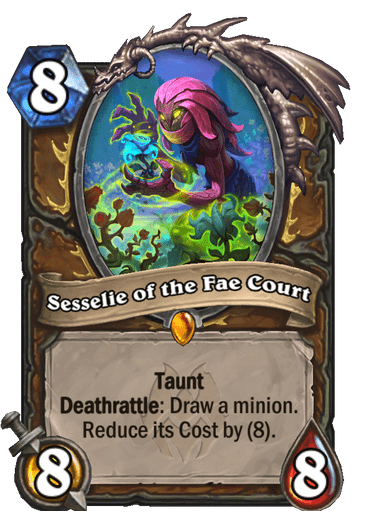 Sesselie is clearly the target of cards like Whomper and Maze, but what’s a bit awkward about her is that she heavily restricts deckbuilding to consist of expensive minions, ideally 8-drops, that you can play for free once the deathrattle is triggered. The problem with that is that you need to minimize your cheap minion count and go very “big”. This can work since we respect the power of Whomper, but we think Sesselie is less versatile as it can only go in one type of deck while its enablers may find other, more broad uses down the road.

Druid looks incredible. Its options seem unlimited, and our greatest struggle was narrowing down the decks we wanted to feature in the theorycrafting article that’s coming on Monday. There’s just so much that the class can do now in the late game that it’s hard to believe none of those things will pan out.

There comes a point in which you have so much ramp that bad draws are just not possible, even if you’re playing a Renathal deck. Widowbloom Seedsman could push the class into that territory. The card is unbelievably strong, and every potential Ramp Druid looks so much better with it, especially when Convoke the Spirits offers more payoff to that ramp. The new Puzzle Box is going to do some damage.

Topior could either be added to an existing deck (like Celestial Druid) or give rise to an entirely new archetype. Its permanent effect is akin to playing a hero card. This 7 mana 5/5 does take some sacrifice to initially play, but good luck keeping your board after if you’re not killing the Druid within the next couple of turns.

The Whomper package also looks threatening. With Stoneborn General and Hedge Maze, it could make up a successful 6-card package that doesn’t significantly change the constitution of the deck it goes into. Add Sesselie and you might decide to go “big”.

And then you’ve got the late game neutral cards, in Kael’thas and Denathrius, that seem like the perfect fit for Druid in particular. The list of possible win conditions seems endless, so that even if Kazakusan and Prestor end up getting targeted by some pesky Steamcleaners, it’s not the end of the world.

So, what could go wrong? One significant enemy to Druid exists within its own class. Celestial Alignment could become a serious problem for other ramping Druid decks and overshadow them. Imp Warlock appears to be a natural counter to Druid, just like the good ol’ days, and should it be very successful and popular, it could hurt Druid’s performance by a significant degree.

We expect Druid to be a very popular class in the early days of the expansion, and it will be up to the format to adjust, attack its likely 40-point life total and counter it. If it cannot do so, it might be time to nerf Celestial Alignment to 11 mana.